I’ve learned an awful lot about efforts to control Great Lakes algae during my many years of environmental coverage, most of which come back to keeping phosphorus and other algae-growing nutrients out of the ditches, streams, and rivers that flow into the lakes.

But I have to admit I’d never given much thought to radishes until this past summer while on a Maumee River watershed expedition with the Montana-based Institutes for Journalism & Natural Resources.

With any luck, they’ll soon become more prevalent throughout northwest Ohio, where a lot of the concern about runoff is focused. 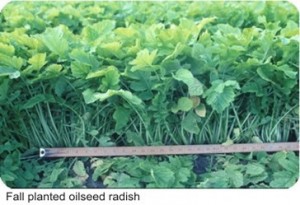 Outside of Toledo and other industrialized cities in northwest Ohio lies some of North America’s most fertile soil for farming, a remnant of the Great Black Swamp that was drained years ago for highly productive agriculture.

Much of the runoff from the land flows into the Maumee and Sandusky rivers, western Lake Erie’s two largest tributaries.

The Maumee itself is the Great Lakes region’s largest tributary while also being one of the most impacted by agriculture and heavy industry, especially sewage treatment. Western Lake Erie happens to be the warmest and shallowest part of the Great Lakes region. It is the region’s most productive area for fish spawning. But it also is its most vulnerable to pollution. So many of the intricate relationships in near-shore land use here apply to the Great Lakes region as a whole.

Enter radishes, something I never even realized was grown in northwest Ohio and I’ve been based here now for almost two decades. Most of them grown in this part of the country weren’t planted to be eaten, which sounds odd enough for farmers to tell you. I always thought the point of farming was to eat what you grew. But most of the radishes you have in your salads come from Oregon.

The radishes planted in northwest Ohio go in about this time of year and are left in the ground to die, explained our host, Allen Dean. Planting doomed radishes, it turns out, is an innovative technique he has used in recent years to improve soil nutrients and reduce runoff from his Williams County farm.

Here’s the basics on how it works: Farmers plant seeds for a plant called an oilseed radish. It

doesn’t actually have to be that plant, but it needs to grow a foot or longer into the soil during the fall in a tubular shape, like a carrot or a parsnip. It also needs to grow a fair amount of foliage up on the ground. Radishes are usually more affordable.

It’s important that the plant drill down into the soil so that when it dies, usually during a mid-January freeze, it decays and leaves behind a v-shaped hole for snow and water to penetrate deeper. The decayed radishes Dean showed us looked like organic socks.

Oilseed radishes are particularly good at absorbing nutrients from the surface and sending them down into the soil as the tubular plant drills it way into the ground.

What appears like a waste of time and money to us city folk is nothing like that at all to smart farmers like Dean. He said he gets a return on his investment from more productive, nutrient-rich soil that doesn’t have to be tilled in the spring. 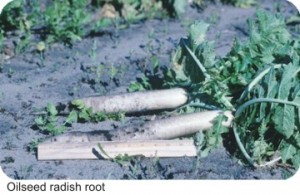 The practice of planting radishes helps keep nutrients from being washed into rivers and streams by spring rains. The holes they have left behind in the soil, as well as the cover crops on the surface, keep more of the water in place.

Oilseed radishes are just one of many examples of how some farmers are using their heads to make no-till farming as productive as possible. For a more detailed overview, check out this Ohio State University Extension fact sheet.

They’re a great example of how cover crops — which look like a bunch of biomass or organic clutter on the surface to us layman — hold a key not just to better water quality but also the never-ending issue of how hard government regulations should come down on farmers.

The more we learn about cover crops, the more it suggests agriculture has some good people thinking out of the box to help at least get us a little closer to a solution.

Radishes and other cover crops can’t be expected to do miracles, but they help keep water on the land. Like buffer strips, tree-lined windbreaks, GPS-targeted fertilization, crop rotation and everything else, it all depends how widely they are embraced.