Thanks to a trail camera photograph the Michigan Department of Natural Resources confirmed for the first time the presence of a cougar in Marquette County. 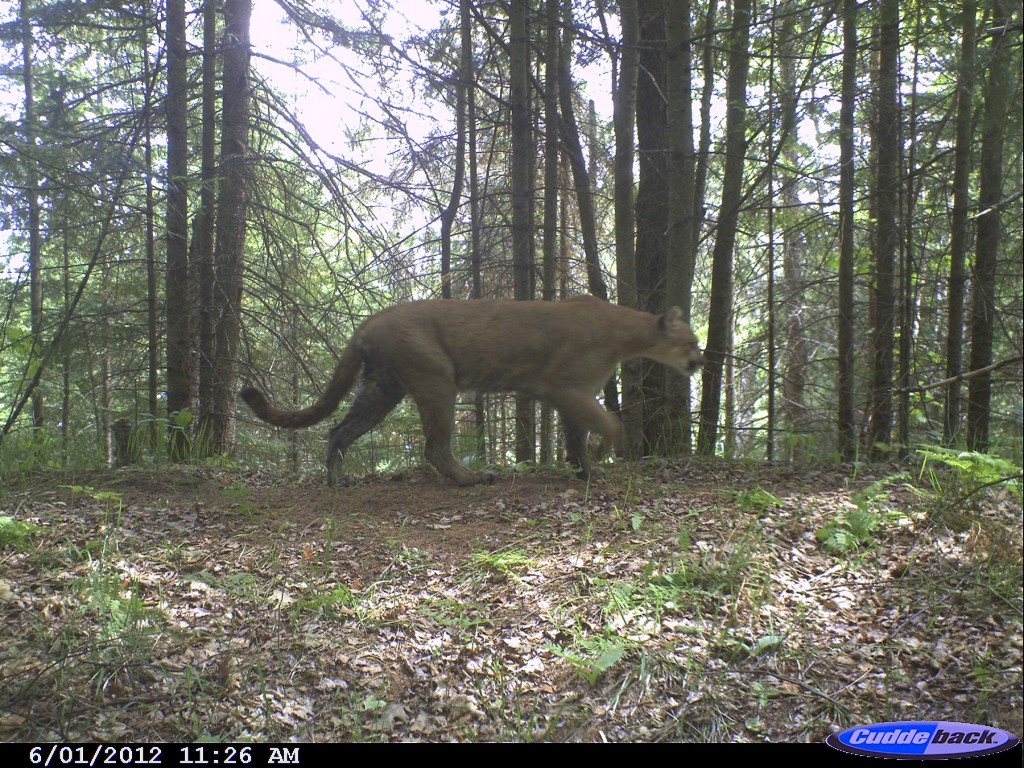 It’s the 16th confirmation by the DNR of cougars in Michigan’s Upper Pennisula since 2008.  At least two have been confirmed this year. Last year one cougar was spotted three different times in two different counties.

The photo was released by the Michigan Wildlife Conservancy, a citizen group that restores Michigan wildlife habitats. It’s collected reports on cougar sightings since 1998.

“This is no doubt one of the best cougar photos in Michigan,” said Dennis Fijalkowski, the executive director of the conservancy. “It’s clear and the size is perfect.”

The photo was taken June 1, by a trail camera in a padlocked case. Its owners choose to remain anonymous.

The Michigan Wildlife Conservancy believes that the photo and multiple other sightings it has verified prove that Michigan has an established cougar population.

According to the department, the presence of cougars in Michigan doesn’t necessarily mean there’s population living there.

“We have a transient population — adults moving through the area looking for a new territory,” said Debbie Munson Badini, a deputy public information officer for Michigan’s Department of Natural Resources. “To verify a breeding population we need to see evidence of cougar kittens.”

So far, the department has no such proof.

There hasn’t been an established cougar population in Michigan since the turn of the 20th century. According to an earlier Echo report, you’d have to travel over 900 miles to the Dakotas to find one. But that doesn’t mean that a cougar can’t travel that far.

Through the use of DNA analysis, a cougar killed in Connecticut was recognized as native to the Dakotas, said Adam Bump, a wildlife biologist for Michigan’s Department of Natural Resources. They will wander extreme distances in search of breeding opportunities, adequate amounts of prey and suitable habitats.

For Fijalkowski, the sheer number of sightings proves otherwise. He believes the state is holding back from recognizing an established population.

“Had we not had over 20 sighting reports in the same area, this would be a cat with a one-way ticket from South Dakota to Connecticut,” he said.

Lack of evidence prevents him from verifying the presence of a cougar population.

“I have a responsibility as a state agency biologist,” he said. “I don’t want to verify something that isn’t legitimate.”

Cougar kittens would be evidence of an established population because they cannot wander long distances like adults, he said.

The accepted likelihood of cougars breeding in the state would increase if the presence of males and females could be confirmed. That requires genetic evidence which you can’t get from a photograph.

While confirming a photo, the Department of Natural Resources will take the time to scout the area for scat and hair that could be tested genetically.

But it can’t do that if too much time has elapsed, Bump said.

Report cougar sightings in Michigan as soon as you can to the Department of Natural Resources here  or to the Michigan Wildlife Conservancy here.

8 thoughts on “There’s a cougar in Marquette County, Michigan!”