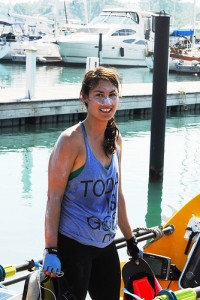 During the past two weeks Jenn Gibbons battled seasickness, heavy rains and 40 mph wind while rowing a boat at the start of a 1,500 mile journey around Lake Michigan’s perimeter.

During the next two months she’ll leave the bright yellow, one-person Liv only 10 times to stretch her legs and fundraise for Recovery on Water, a rowing team for breast cancer survivors. Gibbons is co-founder and coach of the group known as ROW.

She launched June 15 from Chicago and headed north, rowing 15-25 miles per day. Nights she sleeps below deck.

It’s a journey that has never been done before.

“The only reason I’m doing this is for this team of women,” Gibbons said in a recent phone interview she squeezed in at a stop in Racine, Wis.

The roots of the journey are in 2003, when Gibbons, a student at Michigan State University, was approached by two young women who rowed for the university.

She didn’t even know rowing was a sport, but the women thought Gibbons’ 5-foot-8-inch height made her a strong candidate for the team.

They were right. She stepped into a rowboat, picked up a pair of oars and never looked back.

“I had never really felt like I was good at sports,” Gibbons said. “Then I started rowing and loved it over everything else.”

Her coach, Stacy Rippetoe, introduced her to We Can Row, an organization that teaches rowing to breast cancer survivors. Gibbons started coaching them.

Gibbons finished her degree at DePaul University and in 2005 she became the men’s novice coach for Ignatius Chicago Crew. But she missed the kind of work she was doing with We Can Row.

A chance meeting with Sue Ann Glaser, a breast cancer survivor looking for a rowing coach, prompted both women to found Recovery on Water in 2007. Gibbons soon earned a reputation for teaching women to become competitors.

“With ROW I saw people working to improve themselves and learn a skill,” said Karen Clark, a former team member now living in Detroit. “There was more for me than being someone who had breast cancer; I became an athlete.”

Clark hasn’t let a move to Michigan interfere with her love for rowing.

“Jenn’s dream is to have ROW in cities around the country,” Clark said. “Maybe I can bring ROW to Detroit.”

In 2010 Gibbons decided to row solo across the Atlantic Ocean. She wanted to raise funds for ROW and inspire people to start chapters in other cities.

“In the Atlantic, I would be in the middle of nowhere,” she said. “But this journey is about letting people see a big yellow boat and wonder what I’m doing in it.”

Weighing in at 700 pounds with supplies, it’s something to behold. 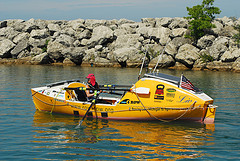 Built for the ocean, the self-righting 19-foot vessel has withstood 30-foot waves and hurricanes.

Gibbons slightly modified the boat’s anchor system to make it “lake-worthy,” with the help of her mentor, Grant Crowley, the owner of Crowley’s Yacht Yard in Chicago.

“I think for fundraising purposes, she made the right decision,” he said. “Jenn’s personality is so outgoing, and there are good people hanging around in Lake Michigan’s harbors.”

Rowing Lake Michigan lets Gibbons make fundraising stops where, in “pass the hat” events, she explains that exercise halves the reoccurrence rate of breast cancer.  And she encourages women to row.

Her goal is $150,000 to buy rowing equipment and fund scholarships for Recovery on Water.

“Jenn is really a special person,” said Rippetoe, now the women’s head rowing coach at Boston University. “As a novice rower, she was a finisher.”

Rowers learn to follow through, she said. “If something is going to interfere with a goal, it won’t come from inside a rower.

“More than anything, that will help her out there on Lake Michigan.”

Lessons on the Lake

It’s the kind of determination Gibbons needed on her fourth day, rowing what she thought would be an easy 11 miles from Kenosha to Racine, Wis., where she had a fundraising stop.

That’s when she learned her first lesson: Conditions on the lake change quickly.

“It goes from your best friend to your worst enemy in a matter of hours,” Gibbons said.

She left Kenosha that morning with a warm wind at her back. The strong breeze only helped her.

The wind enveloped the boat and set a quick pace, Gibbons said. “It was like the lake knew what I needed.”

But as she approached the rocky harbor in Racine, winds picked up; 40 mph 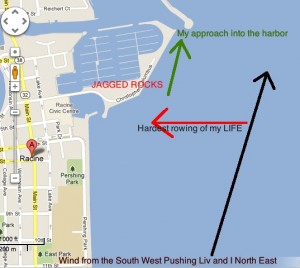 gusts caused her to lose control. Instead of heading west and into the harbor, winds pushed her north toward jagged rocks that could wreck havoc on her fiberglass boat and east toward open water.

With sheer nerve and what she called the “hardest rowing strokes of my life,” Gibbons gained control and got safely in.

That experience taught her a second lesson: You have to put your money in the bank when sailing in high winds.

That means turning your boat an extra 10 degrees into the direction you want to go, Crowley said. If you can do that, when the wind is pushing you leeward, you won’t have to make as large of a turn.

Gibbons quickly learned she needs to either hug the shore or go further out to gain better control.

“I have to understand wind and boat control at all times,” she said.

She thought back to her original plan to row across the ocean.

“I was hesitant to tell people I was going to switch plans; I thought people would think I’m wimping out,” Gibbons said.

“But the lake is harder than crossing the Atlantic,” she said. “I have to navigate through and around things.

“It has more things to crash into, and I’m in a fiberglass boat.”

“In Lake Michigan you don’t have the privilege of drifting off course during a strong storm like you do in the ocean,” he said. “You have to contend with the shore.”

As hair-raising as parts of her journey have been, rowing long hours in a one-person boat gives Gibbons much needed time to think.

For the past two years, the trip consumed her life and conversations, even with family, she said.  While she rows, she reflects on her identity after the trip.

Already a rower, mentor and coach, Gibbons may just add writer to that list.

“I have something to share with people and want to write a book about it,” she said. “What I am doing is extraordinary, I almost forget that sometimes.”

To read more about Gibbons, check out her blog.  Or track her progress around Lake Michigan.

5 thoughts on “Chicago woman circles Lake Michigan – in a rowboat”