As monstrous as it may seem, Michigan’s recent record-breaking 49.8 pound flathead catfish catch  doesn’t measure up to record-breaking flatheads from other Great Lakes states. 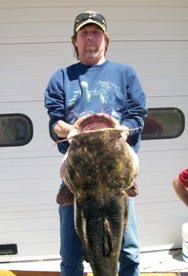 The largest is Indiana’s 79.8 pounder.

Michigan’s record breaker was caught May 22, by Rodney Akey, on the St. Joseph River, in Berrien County.

Pennsylvania is the only Great Lakes state with a smaller flathead catfish (48.6 pounds) on record. New York doesn’t list one.

There is no established population in Ontario.

“Our streams are really cold and clear. It makes them optimal for trout, but not for catfish,” Kalish said.

The better the growing conditions, the bigger the fish. And catfish like turbid, slow-moving water at temperatures above 70-80 degrees. Many of Michigan’s waters rarely get to that temperature, said Kalish.

Indiana’s record breaker was caught on the White River, which is closer to Kentucky than it is Michigan.

The second largest flathead record in a Great Lakes state is a 78 pounder pulled out of Carlyle Lake, in Southern Illinois. 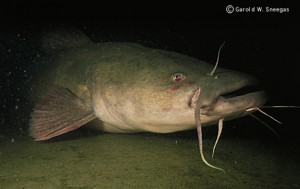 A close-up of the unglamorous flathead catfish. Photo: USGS

There may be another reason for the relative size difference between catfish records.

“It’s one of those species that’s not glamorous, said Dave Mull, an editor at Great Lakes Angler magazine.

People traditionally catch it for food, not for trying to grab the limelight. I would not be surprised if that record has not been broken more than a few times, Mull said.

Here’s how the records match up:

4 thoughts on “Michigan catfish don’t quite measure up”