LANSING — Thousands of shipwrecks lie at the bottom of Michigan waters. These cultural treasures attract thousands of visitors to the state, but changing conditions in the Great Lakes threaten their preservation.

According to Tom Graf, a water resource specialist with the Department of Environmental Quality (DEQ), the Great Lakes are home to an estimated 6,000 shipwrecks with about 2,000 of them in Michigan. 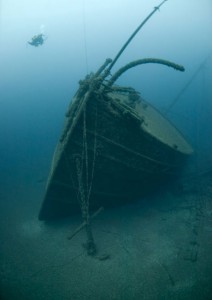 Built in 1890 and sunk in a collision just five years later, this 300 ft freighter, Norman, is located at the bottom of Lake Huron. Photo courtesy of NOAA.gov.

“Every site is a time capsule of sorts,” Begnoche said. “They give us a lot of clues about the history of the state. Even wooden ships are well-preserved in these waters. Unlike the ocean, we don’t have small organisms that eat away at the wood.”

Begnoche said “We have people come from around the world to dive the Michigan sites every year. Here at Whitefish Point, we’ve seen European tourists and folks from across the country, looking to see the ships.”

“A new shipwreck discovery that is shared with the public can generate an immediate tourist draw to the region,” Van Heest said. “These tourists infuse dollars in food, gas, lodging and land-based attractions.

“Consider the 1996 discovery of the wreck of the Three Brothers at South Manitou Island. That discovery brought reportedly over 1,200 people to the island that summer alone, specifically to dive or snorkel the shallow wreck,” Van Heest said.

The group is currently searching Lake Michigan for the remains of Northwest Orient Airlines Flight 2501, a DC-4 airliner that crashed in 1950, killing all 58 on board. 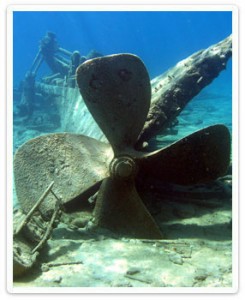 The cold, fresh water of Lake Huron helps to preserve shipwrecks that lie deep at the bottom. Photo courtesy of NOAA.gov.

“That crash was the deadliest airline crash of that time,” Van Heest said. “Finding it would be an incredible discovery.”

But cultural and economic resources like these wrecks are deteriorating, according to the DEQ. The department blames human intervention and invasive species like quagga and zebra mussels.

While the DEQ is charged with punishing divers who remove, alter or destroy artifacts from underwater preserves, Graff said the illegal practice is nearly impossible to stop.

“It’s extremely hard to police these sites,” Graff said. “They are so remote and widespread that we aren’t able to effectively stop divers from harming wrecks.”

But the biggest threat for the long-term survival of the wrecks comes from invasive species.

According to Begnoche, zebra and quagga mussels are both a blessing and a curse for Michigan diving.

“At first it was nice because those mussels are filter-feeders and cleaned up the water. That improved visibility and made conditions even better for divers,” Begnoche said. “But now it has gotten out of hand.

“It used to be you could see all of the details like the name of the ship or even paint that had been there for decades,” Bergnoche said. “Now you can’t see that level of detail, and shipwrecks here look a great deal more like what you would find in the oceans.”