When Mike Ashley first saw the flames, he thought a small leaf pile was burning at the nearby landfill.

But within minutes, the fire spread to the driving range at the Great Lakes Golf Center in Auburn Hills, Mich., which Ashley owns. 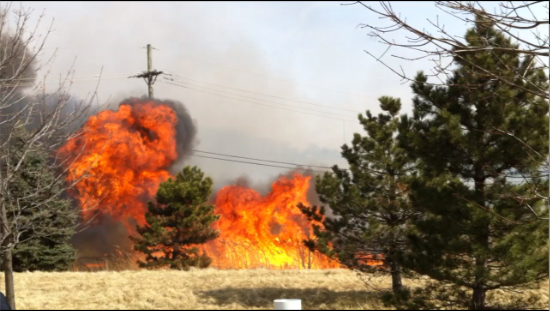 “It burned a giant “U” around our facility,” Ashley said. “It spread really quickly. We have a lot of brush surrounding our site.”

But this was no typical grass fire. Its energy came mostly from phragmites, an invasive grass that can grow to 20 feet tall.

“I could see phragmites and I could see the fire, and it was the phragmites that was burning,” said Robert Williams, chairman of the Clay Township Phragmites Management Advisory Board.

Williams saw videos of the fire from local news media.

The March 7 fire burned approximately 160 acres in two and a half hours, according to John Burmeister, Auburn Hills fire chief. Burmeister doesn’t know how the fire started, but it ended when it hit I-75, a major highway. It caused no injuries or freeway accidents.

Another phragmites fire flared up in Green Bay, Wisc., on March 20. Phragmites burn most in the typical wildfire seasons, April, May and July through September, when conditions are dry. 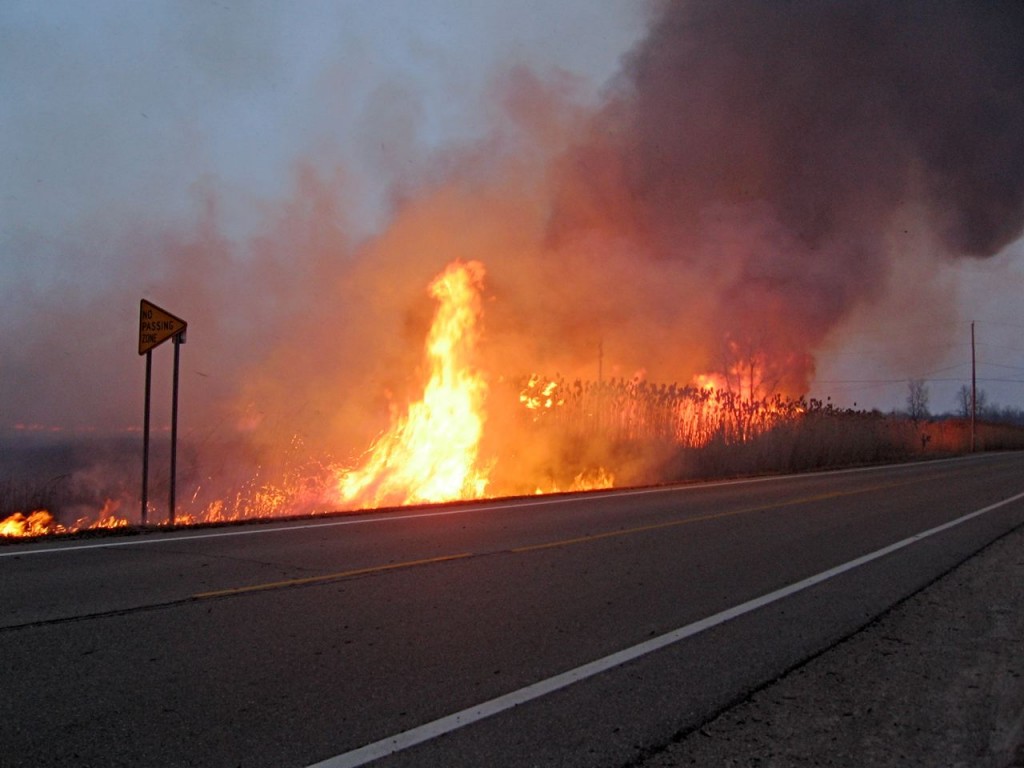 “I think that as phragmites spreads it’s going to be a growing problem because it’s everywhere and up close to buildings,” said David Borneman, owner of Restoring Nature With Fire. “In terms of [phragmites] fires they’re pretty dangerous because they are so hot and spread so quickly.”

Borneman does controlled burns for local areas and conservation districts.

“Phragmites is extremely flammable, and when it burns, it burns incredibly hot with flames 30 to 40 feet high,” Borneman said.

Borneman said he’s seen phragmites fires burn to about 65 feet tall. He said flames from cattails and other native grasses can get up to 30 feet, but because phragmites grows taller than those grasses, the flames reach higher.

Phragmites plants burn quickly, but not completely, so the leftover embers get blown in the wind and can spread the fire.

“[Phragmites fires] can jump roads and waterways with these blowing embers that are out in the wind,” Borneman said. “Prairie fires and cattail fires don’t do that as much.”

To get rid of phragmites, you have to burn it first, which can be scary but effective.

John Simpson, executive director of the Winous Point Marsh Conservancy, said the conservancy will do a controlled burn on 200 acres this year. They’ve done experimental burns in the past and found them effective at quashing phragmites.

“What we’ve been finding is that the best successes have been in sites where we spray the phragmites with herbicide in August or September, then come back the next spring and do a controlled burn in that site to remove the dead debris and dead thatch,” Simpson said. 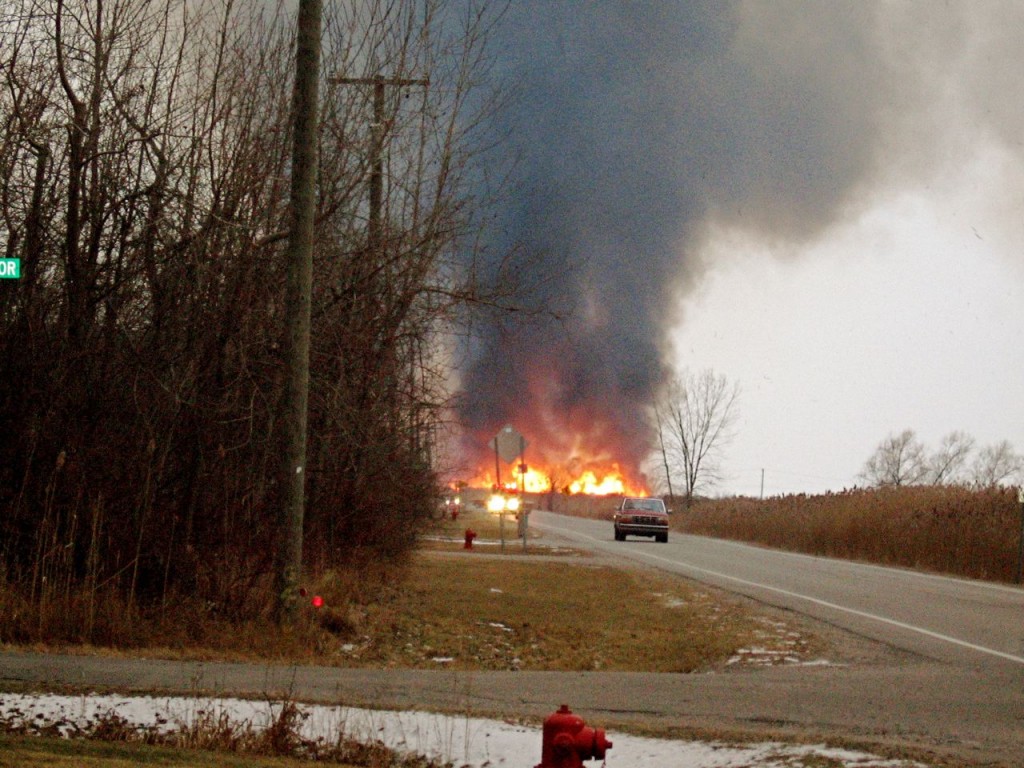 A truck drives through the heat of the fire during a controlled burn on Harsens Island. Photo: Chuck Miller

Controlled burns typically kill at least 95% of phragmites, Simpson said, and the plants that re-sprout are easy to manage.

Even controlled phragmites burns can be scary, but can be managed with lots of water and scheduled when conditions are cool and wet.

Chuck Miller witnessed a controlled burn behind his house on Harsens Island, Mich., in 2009.

Miller said phragmites butts up against garages, boat houses and other buildings on the island. If that grass were to go up in flames, so would the structures.

“It’s just like a tinderbox,” Miller said. “When it’s burning in these big thick clumps it looks like an explosion of napalm.”