Each day Michigan State University students in East Lansing, Mich., waste 14,191 pounds of food, according to a 2006 study. 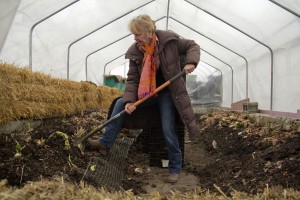 On average, one of the 47, 800 people enrolled at the university and who eats at the cafeteria wastes 1.54 pounds of food and 1.51 pounds of food packaging a week. The data accounts for scraps left while preparing meals, and the food left after people have finished eating.

Michigan State University is one of the few universities in the country to implement a food waste program, said Brendan Sinclair, a university employee who manages the worm composting systems that are part of an innovative approach to managing waste.

Some of the university’s dining halls use a sustainable system in which food waste is used rather than discarded.

The culinary services, which manage all 13 of MSU’s on-campus dining halls, has partnered with the university’s Student Organic Farm to compost food waste with worms. It also uses a new campus anaerobic digester to turn food waste into energy.

“Culinary services wants to do the most they can to be sustainable,” Sinclair said. “I think this will open up opportunities for food sustainability. This is also a great way to connect to urban agriculture for the rest of the country.”

And while not all the dining halls are reusing food waste, Brody cafeteria, one of the university’s dining halls, leads the way.

Two years ago a food pulper was installed at that cafeteria to separate the solid food waste from water.  It condenses food waste to minimize the waste and water ends up in a sanitary system. 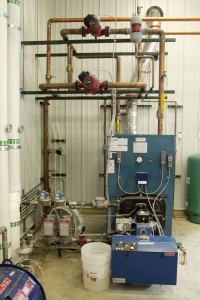 A portion of the anaerobic digester generates waste into biogas. Photo: Natalie Kolb

“Wet chunks of rags and clothes would be the consistency,” said Dana Kirk, specialist for the university’s Department of Biosystems and Agricultural Engineering and author of the 2006 food waste study. “It’s dense and it’s heavy.  It includes bananas … cookies, anything that is on a student’s plate.”

Previously, the food waste from the Brody cafeteria was sent to a sanitary sewer in East Lansing or to a landfill. But now, with the pulper, the waste is sent to an anaerobic digester at the campus dairy farm.

The digester, which opened in September 2011, turns animal and food waste into biogas, a source of energy that can generate 20 to 30 kilowatts or enough to power 10 to 20 houses.  It provides electricity for the digester and surrounding buildings.  Researchers will evaluate in the spring if the project should be expanded and take waste from other cafeterias.

“If we expand the project and the digester, of course we would be looking at offsetting more costs for the university or generating revenue, or offsetting energy from coal or other sources,” Kirk said.

Right now they are still planning.

“We want to see what is next with organic waste management on campus,” Kirk said.  “We do a good job recycling all the different things we can, but waste is another important factor that needs to go into that recycling idea.”

Another food waste tackling project happens in a place where red worms and rows of salad greens are common. The university’s Student Organic Farm, home to the little invertebrate, is located south of campus and only a few miles away from the digester.

The worms create decayed organic matter used to fertilize plants. This compost, generated by the red worms from the food waste, is used in a large hoop house, about 20 by 70 feet with plastic covering the metal frame.

“We are taking literally food garbage and turning it into rich, fantastic soil,” said Laurie Thorp, director of the university’s Residential Initiative on the Study of the Environment. 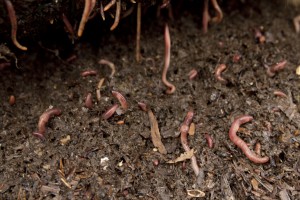 When the compost is ready, it is used to help grow more organic salad greens, which are then transported back to Brody and another cafeteria.  Although the vermicomposting program focuses on these dining halls, the crew at the farm is constantly thinking of new ways to expand the program.

“MSU is like a small city. We’re feeding 30,000 meals a day,” Thorp said. “We want to figure out how to scale this up really big to turn this completely into a closed loop.”

With a new research grant, the Brody complex will welcome a new herb hoophouse next door in summer 2012.

Sinclair, who will manage the new hoophouse, said its purpose is to provide herbs to Brody, several other cafeterias and a university restaurant.

The idea is “to redevelop the connection with food for students who can’t get out to the student organic farm,” Sinclair said.