LANSING — A renewed interest in mining in Michigan’s Upper Peninsula could provide funding for state parks and boost local economies.

Three mining projects are in development or underway in the U.P: Kennecott Eagle Minerals Co. near Marquette; Orvana Minerals Corp. in Gogebic County; and Aquila Resources Inc. and Hudbay Minerals Inc. near Stephenson. 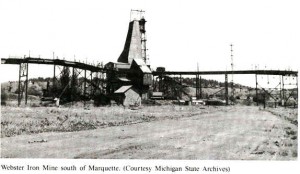 Prior to the renewed interest, mining has decreased in the region.

The last copper mine in the U.P., White Pine Mine, closed in 1996, although some iron ore mines remained in production, said Theodore Bornhorst, a professor of geological and mining engineering at Michigan Tech University.

He said a variety of technologies play a role in the revival.

“There are new technologies – space-based things, airplane measurements and geophysical measurements – that allow us a much better look at the subsurface and that allow us to find things that we weren’t able to find before,” Bornhorst said.

Advances in safety and waste disposal have also improved prospects for the mining industry, he said. Better processing technologies allow miners to recover more metal and put less of it into the waste pile. That allows companies to boost efficiency and profits.

And larger profit opportunities are the reason companies are again showing interest in mining the region.

The price of copper has risen from around 60 or 70 cents per pound in 1980 to nearly $3.80 per pound today, Bornhorst said. At those prices, mineral deposits that couldn’t be mined cost-effectively 30 years ago are now worth the investment.

Mining companies are not the only ones that stand to profit from the new operations, said Thomas Hoane, a geologist for the Michigan’s Department of Natural Resources Minerals Management Section.

Hoane said the state owns the surface property of the mines and leases the land to the companies, which must acquire a lease before anything can be done on the land. Funds from the leases go into the state park endowment fund.

Hoane said the economic impact will be felt locally as well.

“There are a lot of people in the western U.P. that see this as a possibility for gaining jobs, not just with the mining. You have more people buying food, going to restaurants, buying clothing … they see it as an economic gain for the western U.P.,” Hoane said.

Kennecott Eagle Minerals has been developing its Eagle Project nickel-copper mining project, 25 miles northwest of Marquette, since 2002. Kennecott said it will start mining operations next year and plans to extract 300 million pounds of nickel and 250 million pounds of copper over a projected mine lifespan of seven to eight years.

It will also refurbish the Humboldt Mill for processing. Once both sites are operating, Kennecott said it expects to employ more than 280 people.

Jon Saari, the treasurer of the Upper Peninsula Environmental Coalition, said his group is concerned about plans for Kennecott to build a new haul road between the mine and mill. He said the road would go through previously untouched forest and wetland areas, and current roads should be used instead.

Orvana Minerals said it will mine both copper and silver at the Copperwood mine northeast of Ironwood, near the shore of Lake Superior. Orvana plans to collect 852 million pounds of copper and 242,000 pounds of silver.

The company will begin production around 2014.

There are questions about how waste from the mine will be handled, said John Coleman, the environmental section leader of the Great Lakes Indian Fish and Wildlife Commission.

However Orvana’s permit was approved by the Michigan Department of Environmental Quality in February.

Aquila Resources and Hudbay Minerals have partnered to mine gold, silver, copper and zinc from their Back Forty project in Menominee County, 12 miles west of Stephenson.

The project is opposed by a group called the Front 40.

The organization is concerned about the effect sulfide mining will have on the environment, including acid drainage from mines, use of cyanide in processing gold and forest degradation associated with open pit mining, said Ron Henriksen, a member of the group.