Chemicals used for more than 60 years in paper, carpet, furniture, clothing, cardboard and Teflon are showing up in the eggs of Great Lakes birds, according to a recent study. 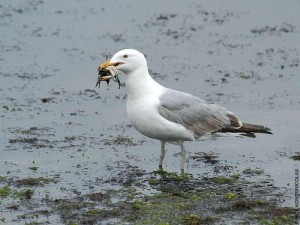 The 20 year study, published in November by Canadian Great Lakes researchers, is the first ever of the presence of poly- and perfluorinated compounds in Great Lakes wildlife.

The results surprised researchers because the U.S. EPA asked major manufacturers to reduce the use of the chemicals by 95 percent by 2010 and eliminate the emissions and their products completely by 2015.

“With the phasing out of the compound, you’d start to see them go down but clearly there are many sources,” said Robert Letcher, a research scientist at Environment Canada and the study’s co-author.

More puzzling, the eggs are more contaminated than the birds that lay them.

Here’s why: Most energy and food consumed by the mother is transferred to the egg. PFCs are unique in that they attach to protein rather than fat. The yolk in a developing egg is almost all protein. 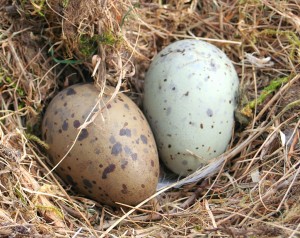 Herring gulls were not chosen by random to study. The researchers believe that the birds share significant characteristics with people. If the chemicals are toxic and eventually cause health problems for herring gulls, it will likely do the same to humans, Letcher said. Herring gulls symbolize an epidemic of contaminant exposure.

With PFCs continuing to rise in wildlife and potentially humans, the obvious question is: What are the health costs?

3M states on its website that the chemicals were, “widely dispersed in wildlife around the world and are detected at low levels in people.” The company also reports that extensive research shows no adverse health effects.

Letcher warns that just because there is not a clear health consequence, does not mean the chemicals don’t threaten human health.

“There are subtle ways in which these foreign substances in our bodies may be manifesting themselves and it’s not completely obvious,” said Letcher, who is also a professor at Carleton University in Ontario.

“The place to be concerned mostly is neonatal, babies in the womb, or early childhood development because it could be messing with the genes, thyroid and hormones,” said Robert Delaney, an environmental scientist with the Michigan Department of Environmental Quality. “All that stuff affects how your brain and immune system develops.”

The most important questions, according to Delaney, are how much PFCs can our bodies tolerate and are the levels we see in nature and in humans dangerous?

“From my point of view, they look really suspicious as a contaminant that’s having an actual effect on us and our health,” said Delaney.

Most PFCs and the products they are in are no longer manufactured in the U.S., but they can be outsourced to other countries and shipped back. Not only are the products making their way back into the U.S., approximately 1,000 to 3,000 new chemicals come into the market every year with no toxicology testing, Delaney said.

“It’s pretty much just outsourced instead of made here,” said Delaney. “It’s really not done anything per se as far as them being made and getting back into our food and products we use because they’re just terrific chemicals, from a manufacturing standpoint, and there’s not an easy way to replace them.”

The only chemical that has shown a decrease in the herring gull population is known as perfluorooctane sulfonate, the chemical created by the 3M Company in 1949 and phased out in 2002, according to the study. However, it remains the most highly concentrated single compound in herring gulls of all the contaminants.

Researchers believe PFCs should receive more awareness because new chemicals are being induced into the market every year. Herring gulls are passing the contaminants on to their young and traceable levels are in the general human population, according to the study and Delaney.

The lack of responsiveness and concern about the problem worries Delaney.

“For me, this is one of the remarkable things I’ve ever seen in my career,” he said. “It’s bothersome that people aren’t aware of it and are thinking that things are fine.”

PFCs in the Great Lakes Basin on Dipity.