A life-giving fluid necessary for fetal development and health could be directly exposing the unborn to flame retardant chemicals.

In 2009, University of Michigan researchers tested the amniotic fluid of 15 pregnant women in southeast Michigan for polybrominated diphenyl ether, or PBDEs. Amniotic fluid both cushions fetuses and provides nutrients for development. 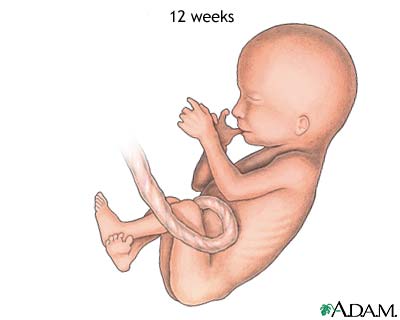 The amniotic fluid passed from mothers to fetuses can be a direct route for chemicals. Photo: nih.gov

The chemicals were in every sample, according to the study in this month’s Science of the Total Environment journal.

Amniotic fluid was not considered a route of chemical exposure for the unborn before this study, said Mark Miller, who led the study as a Ph.D. candidate at the University of Michigan. Miller now works for the EPA.

He said the research team does not know how the chemicals get into the fluid, which is only produced during pregnancy.

PBDEs have been used in plastics, foams and fabrics as flame-retardants since the 1970s. That’s also when the chemicals started accumulating in humans, wildlife and the environment.

Studies have shown them to hurt brain development in unborn animals.

While not as robust, human studies suggest brain problems as well, said John Meeker, an associate professor at the University Of Michigan School Of Public Health.

There are two studies that show a relationship between PBDEs and hampered brain development in babies, he said.

PBDEs are mixed in plastics and foams. They get into air, water and soil. The chemicals accumulate as they move up the food chain so people can be exposed from eating meat, dairy or fish, Meeker said. A recent Echo story reported that male walleye in the Saginaw Bay have high PBDE levels.

PBDEs dissolve in fat, so may be transferred to babies through breast milk as well.

And the chemicals have been on the rise in the Great Lakes region for years, said Tracey Easthope, environmental health director at Ecology Center, a nonprofit research and advocacy environmental organization in Ann Arbor, Mich.

There are three commercial kinds of PBDE formulas, Easthope said. Among Great Lakes states, Michigan, Illinois, Minnesota and New York have banned two of them.

The Ecology Center is pushing Michigan to ban the last kind still allowed – decaBDE.  New York and Minnesota have bans on decaBDE in some products.

“When you have a compound that is persistent and toxic, it can continue to cycle through ecosystems and expose people,” Easthope said. “Our main concern is human health.”

Researchers initially thought that decaBDE was less toxic. But, according to the EPA, when it degrades it can be just as harmful as the others.

In 2009, the only two U.S. manufacturers of decaBDE and the country’s largest importer wrote federal officials saying that they would phase out the chemicals within three years.

But that’s not enough, Easthope said.

“What if something is produced in China with PBDEs and gets here?” Easthope said. “It just makes sense to mandate this in state law.”

It is hard to know how the mothers were exposed since samples were anonymous, said Rita Loch-Caruso, a professor at the University of Michigan School of Public Health and study coauthor.

Usually amniotic fluid is thrown away, so the samples were donated by an Ann Arbor hospital.  The downside of taking anonymous fluid is the researchers don’t know the age, race or other attributes of the mothers, Loch-Caruso said.

But, even with a small sample size and no demographics, Loch-Caruso said the findings are a big first step.

“The prevalence of PBDEs in amniotic fluids in this study tells us that fetal exposure to the chemicals is not uncommon … and probably pretty common,” Loch-Caruso said.