The population of Michigan’s state tree has reduced drastically the past two centuries but ecologists are trying to repopulate it despite significant hurdles. 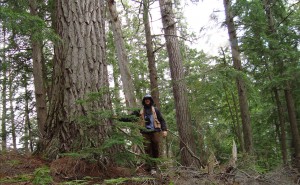 Joshua Cohen, an ecologist with the Michigan Department of Natural Resources, is optimistic about the future of white pines. Photo: Joshua Cohen

White pine forests covered about 13 million hectares at their peak more than two centuries ago in the northeastern United States. Today, stands of white pine cover only about seven million hectares. The loss threatens forestry diversity, vital habitats and one of the Great Lakes region’s most beneficial trees.

It’s a problem not only for the ecosystem but also for the pride of the Great Lakes states, said Joshua Cohen, an ecologist with the Michigan Department of Natural Resources.

“White pine is a defining tree for Michigan,” Cohen said. “The eventual restoration of a lot of these white pine forests, there is just an aesthetic value for people. The biggest trees in Michigan are white pine trees. They can grow the tallest and live 500 years.”

And they contribute greatly to the organisms around them, Cohen said.

Their dwindling quantity is not the only problem.

The real problem:  “It’s not in all the places it once was and that’s an issue,” he said. 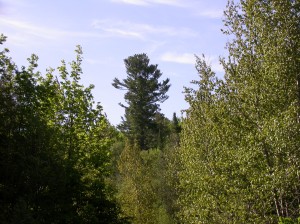 A functioning forest relies heavily on old-growth white pines, Fahey said. They are one of the few tree types that form a supercanopy layer in hemlock-hardwood forests.

Supercanopies rise about 32 to 50 feet above the general hardwood canopy and are intertwined with wildlife. The supercanopy provides nests for several birds including the bald eagle, according to Fahey’s dissertation on the establishment of white pine in the Great Lake region. The brush at the base of the tree provides resting beds for pregnant black bears.

Old-growth white pines, the tallest of their kind, were the target of intensive logging in the mid 19th century, not because it was the best lumber, but due to their height and ability to float down rivers to the mills in Chicago.

Most were swept from the forest after harvesting. Loggers would then start slash fires to pave the way for new agriculture or settlement. Sometimes the slash fires would become so intense, the soil was damaged beyond recovery and new trees could not grow.

More recently white pines have suffered from a germ called Cronartium ribicola, which causes white pine blister rust, said Fahey. Blister rust is most severe in moist conditions during late summer and early fall and has the potential to kill the tree’s branches, weakening it and leading to more severe problems.

And there are other problems.

Researchers are unsure if the white pine can be restored naturally.  But Cohen is enthusiastic about the white pine’s future and believes that patience is the key to natural restoration. 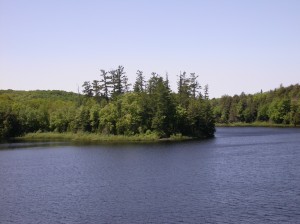 “There’s a lot of responsible forestry going on right now that is supporting the white pines and there’s a lot more we can do but I think time is one of the critical factors,” Cohen said.

“Most of the pines that people are planting into these situations either die or are not competitive with the sugar maple or birch that fills these gaps,” said Fahey.

Although planting white pines from a seed is occasionally successful, it takes a long time for them to grow. A white pine grows about eight to 12 inches per year.

Even the possibility that restoration can be successful in fully reestablishing the white pine has ecologists pushing forward with their research.

“There has been a drastic reduction but I’m optimistic and think things are on the up and up,” said Cohen.