Great Lakes landowners increasingly don’t live on the land they own, making it difficult for conservation officials to reach them and teach them.

Foresters and conservation folks say it’s more about who cares than who’s there, but recent research shows that caring isn’t always enough.

Absentee landowners include farmers and ranchers who rent their land to others, and people who buy it to play on or as an investment. About 42 percent of farmland in the U.S. is absentee owned, according to Agren, an agricultural and environmental consulting firm in Iowa. Those numbers are higher in the Great Lakes. (Source: U.S. Department of Agriculture).

The absent owners do not usually get conservation information from state agencies and forestry officials, according to a recent study  of Michigan, New York and Wisconsin, published in the December 2011 edition of Society and Natural Resources journal.

“The problem is people that don’t live near their land may not be knowledgeable with the local natural resource agency,” said Peggy Petrzelka, a sociology professor at Utah State University and lead author of the study by the Great Lakes Protection Fund.

But only 16 percent said they were enrolled in a state or federal conservation program. Owners have to want to conserve their land or outreach is meaningless, said Eric Roers, forester with the Wisconsin Department of Natural Resources. 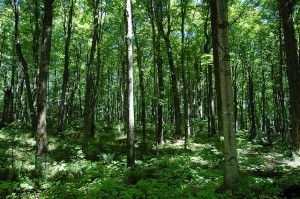 Forest and farm landowners expressed a desire to manage their land, but reaching them is increasingly difficult. Photo: inercia (Flickr)

“For us it’s a matter of who’s interested and who’s not — regardless of where they live,” Roers said. “I make appointments all the time with people from Chicago or Minnesota who want to manage their land effectively.”

“We have a managed forest law, which is a voluntary program and once landowners enter it, there’s forestry work they have to do,” Roer said. “And in return they get a tax benefit.”

Landowners that draft a 25-year land management plan get a tax break.

But Petrzelka isn’t convinced it’s as simple as those who care and those who don’t.

And even if they do find agencies to help, sometimes it’s not enough, said Jamie Ridgely, vice president of Agren, which was involved in Petrzelka’s study.

“Even if absentee landowners get the information they need, there are still barriers to conservation,” Ridgely said. “It takes time and relationship building and state field offices are not in a position to provide that … they have enough people walking through their door every day.”

That’s where private organizations can step in.

“We have a quarterly magazine and a monthly newsletter that goes out to all of our members,” said Bill Botti, executive director of the Michigan Forest Association. “We have members in Hawaii … Alaska … Arizona.”

The association helps private landowners manage their land. While Botti wasn’t sure how many of their 500 or so members were absentee, he said they have members from all across the country.

“It doesn’t matter if it’s a landowner from Detroit that owns the land or someone from Hawaii,” Botti said. “They face the same challenges.”

Botti said most members are connected to a forester, and, for the absentee owners, the forester will sometimes check in on the land and help with tree management decisions.

The study’s next step is to identify ways for agencies to reach and work with the absent owners, as one-size-fits-all communication won’t work anymore, Petrzelka said.

Taking conservation initiatives can prove difficult even for owners who live on their land.

“Last Memorial Day we had a lot of bad storms and a lot of trees went down,” Botti said. “I’m still getting calls from people who live locally who just went to see their woods and they say, ‘Oh my God, I have trees down all over the place!’”