What started as an effort by Calvin College to get faculty members and students involved in protecting the environment has since grown into the Plaster Creek Stewards, a partnership between the college, local churches, environmental groups and others to restore the stream.

Their work is capturing some national attention. In June the group netted $58,500 in one of just five grants from a U.S. Environmental Protection Agency program for restoring urban streams. 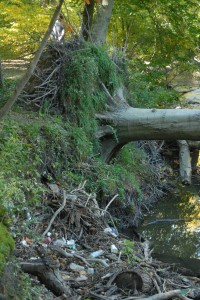 While much of the watershed is indeed urban, the 14-mile creek also flows through agricultural, commercial and residential land before emptying into the Grand River in Grand Rapids. The EPA grant is helping the group build connections between the farmers near the creek’s headwaters, the residents of its suburban middle reaches, and the largely low-income population near its mouth.

“If you get to know someone who lives downstream, or has a school just like yours downstream, hopefully it will create a sense of ownership and compassion,” said Dana Strouse, who provides technical assistance to the restoration effort through her position in the nonpoint source pollution program of the Department of Environmental Quality. “Everybody has a small part to play, so it takes a lot of relationship-building to get there.”

The Stewards figure their best avenue for building that shared sense of purpose is through the Christian Reformed Church, which plays an important community role throughout the watershed. They work through liaisons at local churches to get congregations involved in restoring the creek.

The denomination was brought to West Michigan by Dutch settlers. Its tenets are central to Calvin College’s educational philosophy, and to the Stewards’ work.

“Our motivation for caring about the environment is the biblical vision we hold, that creation is good, and we want it to flourish,” said Gail Heffner, director of community engagement for Calvin and a leader of the Stewards.

The creek certainly isn’t flourishing now. The DEQ considers it unfit for bodily contact, and Strouse said it’s “one of the more impaired streams” in west Michigan.

In the upstream agricultural areas, fertilizer and animal waste runoff creates E. coli problems, and sediment from erosion chokes habitat for aquatic insects and the fish that feed on them. Suburban sprawl has covered much of the watershed in pavement, leading to increased water temperatures, unstable stream flows and erosion.

There’s also “some pretty nasty industrial stuff in the middle and lower watershed,” Heffner said, but the expensive, complicated work of cleaning up industrial pollution “is down the road a ways.”

The Stewards are tackling more immediate water quality problems with a range of tactics.

In the urban portion of the river, they help volunteers stencil signs on storm drain covers, indicating that anything going into the drains ends up in the creek. With the help of local churches, school groups and others, they plant trees and build rain gardens and buffer strips with native plants.

The Stewards are also taking less conventional approaches to stream restoration. For instance, they’ve launched an oral history project to record stories about the creek from people who live in the watershed. The idea is to create a vision of what the creek once was, and could be again.

“We do know there were some very interesting rare plant species that lived here,” Heffner said. And brook trout—a species highly sensitive to water quality and temperature—were once found in the watershed, said project manager Nate Haan.

But they aren’t kidding themselves.

“I don’t think a brook trout would last five minutes in there now,” Haan said.

“The problems are just so severe,” Heffner added. “It’s going to be a very long process.”

Still, the Stewards say they are encouraged by their progress. In addition to winning the EPA grant, they’ve submitted what Strouse said is a strong proposal for federal Clean Water Act funding that is passed along to states for watershed restoration grants.

And it seems their message of moral duty to protect the creek is beginning to resonate even among some of the toughest sells in the watershed. A few years ago the DEQ sought the Stewards’ help in convincing conservative farmers in Kent County to take measures to protect local streams.

“There are farmers there who are connected to our denomination, but they’re not very interested in talking to DEQ,” Heffner said. “There shouldn’t be any farmers in our faith community who don’t want to take part in protecting the watershed.”

By discussing stream restoration efforts in terms of their shared beliefs, Heffner said the group has convinced some farmers to allow them to plant native vegetation along the banks of Plaster Creek’s headwaters, and she hopes more will follow.

Church teachings also motivate volunteers in the creek’s lower reaches. “I don’t live in the watershed, but I worship there,” said Andrea Lubberts, a liaison to the Stewards for Roosevelt Park Church in Grand Rapids. She’s helped her church plant rain gardens and get kids involved in protecting the creek.

“We use a lot of ‘re’ words like restoration, redemption, resurrection,” she said. “We are called to go out into the world and be that redeeming force.”