LANSING — A recent personal property tax ruling that will cost Michigan counties millions of dollars in revenue could prove vital for utility companies and energy manufacturers around the state. 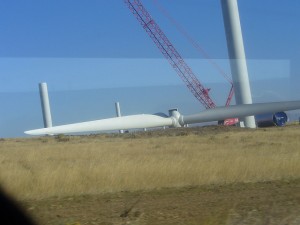 Turbine blades next to the tower they'll be placed on. Photo: dave.worth (Flickr)

The State Tax Commission ruling allows energy companies to pay substantially less in personal property taxes and gives a break to state manufacturers as well. Companies that build wind turbine blades, “casts” — which house the turbines – and related parts now pay significantly less in property taxes as a result of the ruling.

In his State of the State address, Gov. Rick Snyder stressed how the reduction on taxes for industrial equipment will effectively boost the economy and create jobs.

Mark Clevey, manager of renewable energy programs at the Michigan Energy Office, called the tax ruling a positive for the future of state energy businesses.

Clevey noted that utility companies are now required to make 10 percent of the state’s energy renewable by 2015, so manufacturers are producing more renewable energy parts than the state has seen before.

“I see the renewable energy boom in Michigan as a combination of the relieved tax burden on companies and the popularity of green energy around the state,” Clevey said.

“The current administration acts under the presumption that tax reform will stimulate the entire economy. Whether or not this aspect alone results in an upward shift in the renewable energy market is yet to be seen,” he said.

Clevey said casting companies and turbine part manufacturers are beginning to locate to Michigan from overseas, a trend he described as a monumental change compared to three or four years ago.

Dan Bishop, the public information director at Consumers Energy, also stressed how the popularity of renewable energy, along with the 10 percent requirement, played a big role in heightened investment in wind energy.

Bishop said he is confident the tax break will encourage more Michigan manufacturing companies to diversify their products to meet energy company needs.

Bishop said the tax incentive for manufacturers bodes well for the future of renewable energy around the state.

“What we’ll certainly see is more wind farm projects being constructed. There is a high demand for turbines, and with a lessened tax burden, manufacturers will be able to produce more of the required parts at lowered costs,” Bishop said.

“I truly believe we are witnessing a wind revolution across the state,” he said.

There are several large-scale wind farms under development across the state, including projects in Huron and Mason counties, and one that Bishop said is still in the planning stages in the Upper Peninsula’s Delta County.

According to a fiscal analysis by Development Research Partners, a research and analysis firm, the Lake Winds project is expected to provide 150 jobs during peak construction, with eight to 12 full-time jobs once the park opens.

The report said construction will provide direct economic benefits in Mason County, with workers spending the money they earn at local businesses.

The report also indicated the county would receive $29 million in personal property tax revenue over 20 years. However, the recent tax ruling means that amount is likely to drop.

According to MoReno Taylor, legislative coordinator for Michigan Association of Counties, the dip in revenue could end up as low as $20 million, essentially costing Mason County $9 million in potential taxes that could be used for public services.

“Ultimately the agreements made between counties and companies should be honored,” Taylor said. “For counties, it really is an issue of money, so I think they expect companies to replace the lost revenue.”

Taylor said that counties, especially those with limited sources of revenue, generally invite such projects, regardless of how much is generated in taxes.