There’s no federal requirement that municipalities have to disinfect the groundwater pumped into kitchen sinks, bathtubs or watering cans. Though groundwater is traditionally believed to be clean, Wisconsin scientists found that viruses can get into deep wells and make people sick. 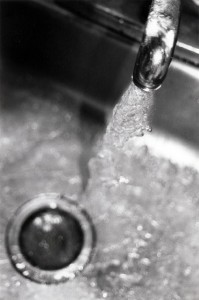 “We’ve repeatedly sampled a number of wells in Madison for viruses, and found them quite frequently,” said Ken Bradbury, hydrogeologist for the Wisconsin Geological and Natural History Survey.

Bradbury began studying how pathogens, or germs, travel through layers of rock to get into either deep wells or aquifers. He sampled three wells in Madison, Wisc., eight years ago and found viruses in two of them. Bradbury thought he had made a mistake, but a repeat experiment produced the same results.

Since the original three wells, Bradbury has repeatedly sampled about 15 different wells in Madison. He’s never found one totally virus-free.

The viruses in the wells are the same ones that live in the human digestive tract, which means they’re infectious and could cause disease.

“They’re the same sort that would cause everyone on a cruise ship to get sick,” Bradbury said.

Residents of Madison don’t need to worry. The city chlorinates its drinking water, which Bradbury said de-activates viruses. But some communities don’t.

Mark Borchardt, a research microbiologist at the Agricultural Research Service of the U.S. Department of Agriculture, studied the rate of gastrointestinal illness related to groundwater in communities in central Wisconsin.

“We measured that a significant portion of illness in these communities came from their drinking water, from the groundwater,” Borchardt said.

The study focused on 14 communities in Wisconsin that don’t disinfect their drinking water, and split them into two groups. In half of the communities he installed an ultraviolet light filtration system and he left the others without filtration. Families in the community filled out weekly surveys about their health.

After one year, Borchardt switched which group had the filtration systems and which didn’t, and surveyed families again.

“It turns out that wells are responsive to what infections are in the community at the time,” Borchardt said.

That means if a virus is prevalent in the community, it’s probably present in groundwater too.

One way that germs get from the surface to groundwater is through old, leaky sewage systems.

“There have been disease outbreaks related to those things, but how much sporadic illness is related to distribution system contamination hasn’t been measured before,” Borchardt said. “The bulk of it came from groundwater.”

Gastrointestinal illness can cause diarrhea, fever, nausea and other symptoms. Although uncomfortable for most, for small children, the elderly and people with low-functioning immune systems, these illnesses can be serious.

“For most people it’s an unpleasant annoyance, but for some it can be fatal,” Bradbury said. “This is not a trivial illness.”

The legislation was reversed this year.

But although it’s not required, Jonas said all but approximately 60 Wisconsin municipalities disinfect groundwater.

“There are certainly benefits to disinfection,” Jonas said. “It’s not required but we encourage it.”

If viruses can get into water in deep wells, things like pesticides, pharmaceutical compounds and other pollutants can too, Bradbury said.

“There’s been a growing realization of the connection between surface and groundwater,” Borchardt said. “This takes it a step further. We need to be thinking about sanitary practices on the surface because it does end up in the groundwater, even in deep wells.”