Wind turbines popping up around the Great Lakes are getting a reputation among webbed-winged night prowlers as large, spinning murderers.

Researchers in southeastern Wisconsin are seeing 10 bats deaths for every one bird death at local wind farms, said Melissa Behr, a veterinary pathologist at the University of Madison-Wisconsin. 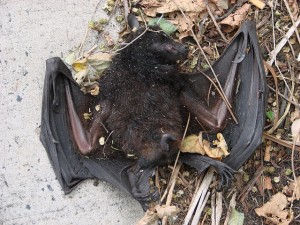 Dead bats are showing up around wind turbines through the region and country. Photo: Velaia (ParisPeking) (Flickr)

It makes sense that heavy, spinning blades could kill flying wildlife. But bats have internal sonar. They use it to call out and listen to the returning echoes.

It usually keeps them from running into things.

The math is not in their favor.

“A bat would have roughly a quarter of a second to react to a turbine blade — not very long at all,” David Drake said in a prepared statement. Drake is a wildlife ecology professor at University of Wisconsin-Madison.

Researchers from the University of Wisconsin-Madison studied these two causes of bat deaths — trauma from running into blades, and trauma from pressure changes, which is called barotrauma. Their findings were published in the Journal of Mammalogy.

They collected 41 dead bats in 2009 at the Forward Energy Center in southeastern Wisconsin to examine how they died.

Behr cautions that just because fractures suggest they hit the blade, barotrauma may still play a role.

“If bats are barotraumatized, their ears fill with fluid and they would not be able to locate the blade,” Behr said. “It’s possible that bats that hit blades were barotraumatized beforehand.”

Southeastern Wisconsin is along the migration route for a few species of bats. Migrating bats die more frequently by turbine than resident bats, according to the United States Geological Survey.

“When they come back north in June, they seem much less susceptible to being killed then,” Behr said. “Then in August or September they go back south and they get nailed.”

There were approximately 40 bats killed per turbine at 60 turbines in southeastern Wisconsin during the past migrating season, Behr said.

The videos below show the migrating patterns of the three types of bats that die most frequently at wind turbine sites — hoary bats, silver-haired bats and red bats. There are dense numbers of all three species in August and September in southeastern Wisconsin.

“We try to get developers in to consult with us as early as possible,” Utrup said. “We can help find out where the bats are and help place turbines away from those areas.”

Detectors are used to listen for bats so turbines can be placed away from them, Utrup said.

Another option is turning off turbines on nights with low wind speed.

“There seems to be more deaths when it’s a low wind speed night,” Utrup said. “We’ve seen some success regionally with shutting down the turbines at night.”

It is unclear why low wind speed nights cause more bat deaths. It’s possible that they’re flying around more those nights because insects are more active, Utrup said.

Some wind developers are putting up money to figure out the bat death problem. The University of Wisconsin-Madison study was partially funded by the Forward Wind Energy Center in southeastern Wisconsin.

“We can’t conclusively say what’s happening,” Behr said. “We can’t prove all the broken bones were caused by the blades … it could be barotrauma. We really need more research on this.”