Editor’s note: Synthetic musk is one of the pollutants of emerging concern to be discussed Oct. 11-14 in Detroit at the 2011 Great Lakes Week.  Detroit Public Television is providing ongoing coverage of Great Lakes Week at greatlakesnow.org

Some scientists worry that the chemicals that make lotion, soap, trash bags and a myriad of household products smell good are an emerging class of pollutants that threaten environmental and human health.

There is “supporting evidence that more study and research need to be done,” said Antonette Arvai, a physical scientist with the International Joint Commission, a U.S. and Canadian agency that will discuss newly emerging pollutants at its biennial meeting in Detroit this week. 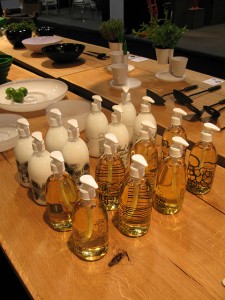 Use of fragrant chemicals in the United States has doubled since 1990. A recent study by the commission identifies synthetic musk fragrance, used in a great number of personal care and cleaning products, as a chemical of emerging concern.

“When musk is applied to the structure of a cell wall, more toxins can pass through it,” Arvai said.  The commission has recommended that scientists and regulatory authorities in both countries study the health risk of synthetic musks.

Concerns go beyond human health. Synthetic musk accumulates in aquatic organisms over time.  A 2009 study in Environmental Toxicology and Chemistry reported that two musk fragrances, Galaxolide and Tonalide, were found in every sample of fish taken from the North Shore Channel in Chicago.

A large portion of world-wide musk production is Galaxolide and Tonalide.

Keri Hornbuckle, a professor of civil and environmental engineering at the University of Iowa, has studied these fragrances. In 2006, she and others discovered that large amounts of Galaxolide and Tonalide can kill the larvae of freshwater mussels. She also found that juvenile mussels grew more slowly when they were exposed to higher concentrations of the chemicals.

Hornbuckle underscores that musk fragrance has not yet been found to be toxic in humans. Most of people’s exposure to it is through the direct application of personal care products.

It has been found in human body fat, and some types can get passed through breast milk.

Hornbuckle attributes a lack of studies on musk on their assumed non-toxicity. They are not seen as a direct threat; therefore, there is not a lot of attention for them.

Aquatic organisms are exposed to synthetic musk that is discharged from wastewater treatment plants. Some facilities do a better job than others of removing them.

The most effective plants use activated sludge or lagoons, said Staci Simonich, a professor of chemistry at Oregon State University. Synthetic musks cling to sewage sludge and are then taken out of the water system.

Lagoons and their surrounding vegetation provide the time for better removal of musk fragrance from the treated water.

Depending on the system, “90 to 92 percent of musk fragrance is removed from treated water,” said Simonich, who has studied treatment plant’s effectiveness in the removal of the chemical.

The technology is there, but it can be expensive, Hornbuckle said. “Water treatment plants are optimized for disease removing organisms. They could manipulate the drinking water treatment process to remove musks, but it wouldn’t be cost effective. Their primary goal is to remove diseases.”

The International Joint Commission recommends more research on synthetic musk’s toxicity to people and aquatic organisms and its impact on the environment. It also suggests monitoring where musks are disseminated into the water.

9 thoughts on “Fragrant chemicals may pose threat to humans, environment”