Editor’s note: Pharmaceutical contamination is one of the issues that will be discussed Oct. 11-14 in Detroit at the 2011 Great Lakes Week.  Detroit Public Television is providing ongoing coverage of Great Lakes Week at greatlakesnow.org

Tracking pollution in the Great Lakes takes more than monitoring goo spilling out of factories or oil gushing from a pipeline. 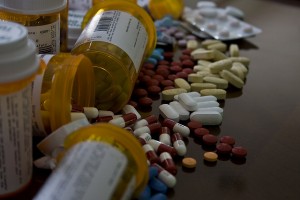 Pharmaceutical compounds are a chemical of emerging concern in the Great Lakes, and may pose a threat to human health. Photo: NVinacco (Flickr)

The International Joint Commission recently highlighted a subtler source of contamination lurking in medicine cabinets throughout the region. Pain medicine, birth control, anti-depressants and other pharmaceuticals make their way into the Great Lakes through municipal water systems and stormwater runoff. That threatens human health, harms wildlife and contaminates drinking water, according to the report.

Saad Jasim, a scientist on the commission’s Chemicals of Emerging Concern Work Group, thinks he has a solution. When ozone, a highly reactive molecule made of three oxygen atoms instead of two, is added to wastewater it oxidizes the pharmaceutical chemicals.

“It breaks them into their other compounds,” Jasim said.

“There are studies that show the presence of pharmaceuticals have impacts on species, like fish,” Jasim said. “They grow female and male organs in the same fish. They’ve even seen changes in the physical shape of the male fish to look more like female fish.”

The health risk for humans is hard to study. Humans live a long time, and they travel — making it difficult for scientists to find the source of contamination.

“Because the life cycle of fish is much smaller than humans you can conduct this study in a lab and come to a conclusion in a year or two, much faster than you do for human beings,” Jasim said.

The biggest risk from pharmaceutical exposure for humans and wildlife is when small amounts of chemicals build up in them over a long time.

“They have a long shelf life, so if you keep using these compounds you add to the accumulation in the ecosystem or a human drinking them,” Jasim said.

The pollution doesn’t come from just one source, a challenge for those trying to stop the contamination.

It can happen when topical medications get washed off, humans and animals excrete them or they are flushed down the toilet or thrown into the garbage.

“For a long time people were told to flush those materials down the toilet, but now the research has come out against that,” Kammin said. “Don’t flush it down the toilet, try to find a permanent collection program.”

Her program helps communities purchase medication collection boxes. They have to be secure and can run about $500, a large investment for most small towns.

In that case, people should mix medicines with kitty litter or coffee grounds and seal them in a plastic container. That keeps them away from the environment and from children and pets.

Pharmaceuticals are rarely filtered by wastewater treatment plants, Jasim said. Requiring such plants to remove contamination would be easiest, but a lack of research on health risks and difficulty detecting and removing the compounds keeps regulation away.

“The industry, the scientists, the agencies are continuing to look into this because we need to know more,” Jasim said.

Filtering out compounds at home is less successful.

“It’s hard to use home devices to deal with these compounds, and you don’t know how well they work,” Jasim said. “That’s why our focus is on the municipal water systems.”

So for now, stressing responsible use and proper disposal is what Jasim sees as the best way of addressing pharmaceutical compounds in the Great Lakes.

“You can’t tell people not to use deodorant,” Jasim said. “A proper use without throwing these compounds in the sewage would reduce the impact.”