Even a region known for its water can get a little parched, as shown by the U.S. Drought Monitor late last month. 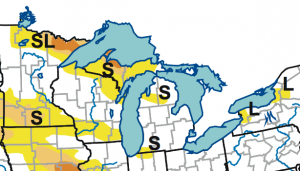 Droughts in the Midwest are far less significant than those in the South, which looks like a swollen, red bee sting in this graphic from the U.S. Drought Monitor. But parts of Minnesota and Michigan’s Upper Peninsula clearly show areas of severe drought.

The National Drought Mitigation Center classifies a severe drought as one that might result in crop or pasture losses, water shortages and imposed water restrictions.

The areas of severe drought in the Midwest are predicted to persist or intensify. Photo: National Weather Service

Drought in these areas of Minnesota and the Upper Peninsula don’t appear to be improving, according to the Seasonal Drought Outlook for the rest of the year. Instead, the drought will persist or intensify, potentially causing more crop losses and water shortages.

To see cool drought animations and other climate forecasts, check out the Drought Monitor website.

One thought on “Severe drought in Minnesota and Upper Peninsula”