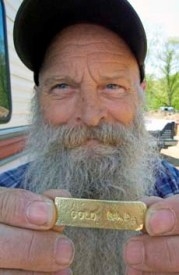 Wetland specialists in Michigan are getting schooled in an obscure and unlikely area — gold prospecting.

With prices reaching all time highs – approaching $1,900 this summer – Michigan has seen a boost in ambitious hobbyists searching for gold.

And while a seemingly innocuous and maybe silly way to spend free time, the uptick in prospecting has caught the attention of the Michigan Department of Environmental Quality. Scouring rivers and creeks for a few flakes can disrupt fish spawning and sediment flow.

Long-associated with the west coast, gold prospectors are everywhere, said Warren Bennett, president of the Michigan Chapter of Gold Prospectors Association of America.  His members are a diehard group.

“We’ve had an increase in membership this year,” Bennett said.  “We saw even more of an increase when the gold first started going up a couple years ago.”

While not a hotspot for the precious metal, the Great Lakes region has “glacial gold.”

“Gold here originated in Canada,” said Mike Williams, geologist with the Ohio Department of Natural Resources.   “As the glaciers moved, every thing was ground up to small flakes.

“As channels developed through melting, the material congregated, and that’s where you see gold.” 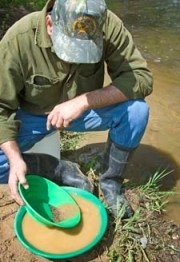 Hobbyists mostly pan, sluice or dredge for gold.  Panning, the most common and cheapest way to get started, is simply sifting through sediment with a pan.  Sluicing involves placing a box in the water to collect passing sediment. Gold settles in the ridges of the box.

Dredging involves vacuuming sediment from river and creek bottoms, drawing it to the surface where the gold can be collected.

This was all news to those who regulate the state’s natural resources.

“I knew nothing about it,” said Todd Losee, wetland specialist with the Michigan Department of Environmental Quality.

Losee was recently invited by a local prospecting group to witness a dredging for gold operation.

“Our biggest concern is the disruption to the bottom of the rivers,” Losee said.  “They typically dredge in gravel bottom areas and these are fish spawning areas.  It could certainly harm eggs, or just scare off young fish.”

Most hobbyists pan and sluice, according to Bennett, but there are some areas in Michigan where members dredge.

“We have a couple places we are allowed to use them, we’ve gotten permits through the county or state,” Bennett said.  “But as a general rule, they’re not widely accepted.”

Jim Terbush, a gold prospector from just outside of Saginaw, is candid about his preference to dredge.   He said he hasn’t had any problems from state regulators while using the dredge in rivers.

Michigan isn’t the only state with optimistic gold hunters.  Most Great Lakes states allow panning, sluicing and other non-motorized ways of prospecting on state land without a permit, with considerations for fish spawning season.

In Illinois, all prospecting is forbidden on state land.

Ohio doesn’t regulate hobby prospecting.  While there’s some gold in the northwestern part of the state, “on a really good day working sun up to sun down, someone might pay for the gas to get to site,” said Williams of the Ohio Department of Natural Resource.

Sluicing in Michigan can only be done with a permit and during July and August.  There are parameters set for the size of the sluice box – 52 inches long, 12 inches wide and 6.5 inches deep.  Prospectors must identify a 300-foot area where they will be sluicing.  There are no regulations for panning. 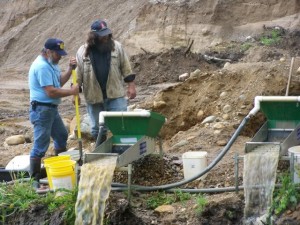 Suction dredges vaccuum up sediment to the surface. Photo: michgpaa.com

To dredge, prospectors have to apply for a permit, much as they would have to for something like a boat slip, Losee said.  Mechanical dredging is not allowed on state land.

The state agency is working with prospectors to mitigate any disruption to rivers or creeks.

“We opened up prospecting on state land recently but there’s a number of sensitive areas where they can’t,” said Chad Fizzell, a state wetland GIS specialist.  “If there are endangered species, natural rivers … those are places they’re not allowed.”

It’s not a “huge thing on our radar,” said Losee, but the department is trying to understand the methods.

“These are people who are out enjoying our waters and we have to balance that with environmental impacts,” Losee said.  “We feel the permit structure we have in place is adequate.”

If dredging becomes more popular, the department may modify the permitting, Losee said.

To Bennett, prospecting is just like many other hobbies in Michigan — a reason to be outside with friends.

“My wife and I started years ago, and met great people and grew from there,” he said.  “Now I have four kids and they get so excited to go.  It’s like any hobby, you just get into it.”

23 thoughts on “Searching for gold in Michigan’s rivers”