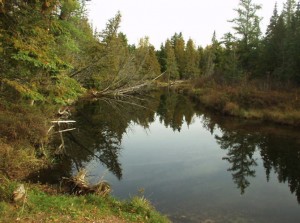 The fate of the Muskegon River in a warming climate depends on how the land around it is managed.

That’s the message scientists say they’re getting from computer models that predict the effects of climate and land use changes on the river’s fish and flows.

A recent round of simulations found that the warmer and wetter weather expected in the region will bring big changes to the river, including more erosion and shrinking habitat for trout and salmon.

But officials can soften the blow if they can reign in urban sprawl and promote forest growth in the 1.8-million-acre watershed, according to Mike Wiley, professor of ecosystem management at the University of Michigan’s School of Natural Resources and Environment. Wiley led the team of university and state scientists who developed the models.

“Land use is a potent agent of change and climate change will have potent effects,” Wiley said.  “It is possible to make choices with land use that will mitigate what seem likely to be the effects of climate change.”

Land use is key because the pavement and pipes associated with urban land funnel rainwater into the river more quickly. Forest cover slows the water down, even rerouting some of it back into the atmosphere when it’s taken up by trees and escapes as vapor through leaves.

Experts say one of the likely effects of climate change is more snow and rain, which will send more water into the river. That extra water in the channel could cause major erosion where the brawnier river flexes against its banks.

A river carves its course through the landscape based on how much water and sediment it carries, Wiley said. If more precipitation dumps more water and dirt in the river, its course will change.

“The river isn’t just a fixed pipe that’s going to sit there and have more flow or less flow,” Wiley said. “It’s going to change its physical position and size.”

Climate change will likely destabilize parts of the Muskegon’s channel no matter what happens to the land in the watershed, Wiley said.  Even if the region can curb the rate at which urban development grows and forests shrink, some serious erosion could be in store for 57 percent of the Muskegon channel system, according to the model’s forecasts.

But if urban growth and deforestation continue in the watershed at the same rate as the past 25 years, that number jumps to 75 percent.

This research has important implications for the kind of conservation work that goes on in the watershed, according to Richard O’Neal, a Michigan Department of Natural Resources fisheries biologist who often works on the Muskegon.

For example, restoration projects on rivers often involve shoring up eroding sites with native plants or artificial structures. But if the models are right, those projects aren’t going to cut it.

“The point here is that you really cannot go into a channel and do things in the channel to fix the problem,” O’Neal said. “You have to deal with the land use issues.”

Dealing with land use issues means getting a lot of people involved, he said. While modern research tools like the Muskegon model look at the river from a watershed perspective, most people don’t.

“People only think about, ‘Well I’ve just got this one little farm field’ or ‘I just cut down a few trees out in front of my yard here,’” O’Neal said. “They’re not thinking about the whole picture.  That’s occurring all over the watershed.”

One way to work around that problem is to break the 1.8-million-acre watershed into smaller units based on the lakes and streams that eventually flow into the main stream. That helps people benefit the whole system while still focusing on what they know, said Gary Noble, executive director of the Muskegon River Watershed Assembly, a nonprofit group with conservation and education initiatives in the region.

Based on Wiley’s modeling work, Noble said his group has focused its restoration work on planting trees in the smaller watersheds that need it most.

One of the assembly’s projects involved planting 350 tamaracks in Montcalm County along Tamarack Creek, a tributary to the Little Muskegon River. The group planted another 200 native trees along Penoyer Creek, another Muskegon tributary in Newaygo County. A recent grant from the Sustain Our Great Lakes program will help them reforest 11 acres along Cedar Creek, cited by the DNR as one of the best brook trout streams in the state.

“People up in Higgins and Houghton Lake (in the Muskegon’s headwaters) typically don’t think too much about Muskegon and Muskegon Lake (at the river’s mouth), yet the waters are connected.”