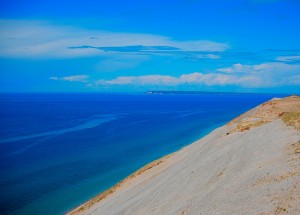 Stephen Leatherman, director of Florida International University’s Laboratory for Coastal Research, has released a list of America’s Best Beaches on Memorial Day since 1991 under the pseudonym Dr. Beach.

This year he highlighted the country’s “Third Coast” for the first time.

Let’s cut to the chase — here’s the list (interactive map below):

Honorable mentions include the most improved Great Lakes beach, North Beach, Racine Wis. on Lake Michigan, and Haven State Park on Lake Michigan.
Leatherman originally planned to rank the top 10, but chose only five for the final list.

“I only received about 30 nominations and have not rated personally that many beaches in the Great Lakes, considering how many beaches that you have,” Leatherman said. “Therefore, I thought it was best to start out with five rather than 10.”

The nomination period ended in October. Each beach manager or representative submitted a survey and a sand sample. With help from Erin Dreelin, associate director at the Center for Water Sciences at Michigan State University, Leatherman tweaked his criteria to better fit the freshwater beaches. Criteria included water and sand quality, safety, and environmental quality such as the presence of invasive species.