Residents of Badger, Wis., may soon be expected to switch from their wells to a public water supply after many years of potential exposure to toxic chemicals 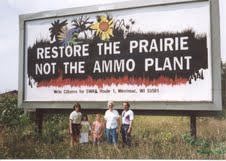 Some residents want the environment restored.

The U.S. Army recently offered to install the public water system to the rural community, 26 miles northwest of Madison, following a long-standing controversy on how to clean up toxic waste dumped at the weapons’ complex between 1942 and 1975.

Plan will not restore environment

But the Wisconsin Department of Natural Resources wrote to the Army this week that while this plan would safeguard human health, it doesn’t restore the environment to the most practicable extent as required by law.

This echoes the demands of a local group that wants the Army to guarantee future safe drinking water as it continues to cleanup the area.

“This proposal came to us as an ultimatum which we thought was not reasonable,” said Laura Olah, chief executive of Citizens for Safe Water Around Badger. “It seemed like we didn’t have much of a choice in it.”

Olah said she was very pleased with the Wisconsin agency’s decision to ensure that no reasonable amounts of contaminants are left on the ground.

Under the proposal, local dairy farmers, grazers, stables and other farm operators would abandon their existing livestock wells for the public supply.  The only wells left open would be those used for irrigation.

Part of the Army’s proposal was to phase-out all ongoing clean-ups and allow remaining contaminants to naturally disperse and degrade overtime.

This could be possible, but the state also   wants the Army to provide additional evidence that natural degradation could restore the soil and groundwater to reasonably safe standards.

The Army has two other alternatives:

The new municipal water supply option is cheapest at $40 million.

The feasibility of using the organisms — biotreatment – has only been tested under laboratory conditions and not the local groundwater system, according to the Army. Chemicals   from the contaminated area have also been detected in private wells several miles from the plant.

Contaminants traced in nearby waterways 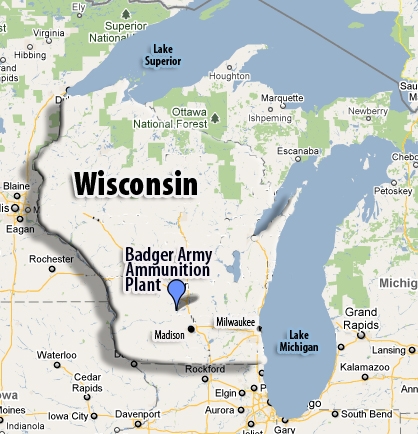 Losing the use of groundwater is just one of the costs of underground water pollution, according to several studies.  Migration of contaminants has been documented from the weapons complex’s spill sites to nearby lakes and rivers.

Last year a study revealed that traces of Dinitrotoluene, DNT, a highly toxic chemical commonly used in explosives, have begun seeping into the Wisconsin River, which borders the east side of the complex.

The Army has also recently reported that three groundwater contaminant plumes containing explosives and other chemicals are flowing to the surface water, wetlands and springs of the Wisconsin river-way, according to the water safety group.

Olah’s group worries that if the area is left contaminated, the discharge of low-level toxins to surface water will continue for at least 40 years — or even a century — given the “mass” contamination still present in the soils, she said.

Despite their protests, the Army says its offer of a new municipal supply has been “warmly received” by residents.

“For the past nine months we have made available the idea of a district water system for public review and comment,” Kenney said.  “We have heard only positive or neutral reactions from those involved.”

Lori Bocher, an agriculture marketing specialist with the U.S. Dairy Forage Research Center station in Badger, said the change would not be a major impact to the center which has 700 dairy cattle.

“The Army will subsidize the water costs so much that it’ll cost people the same as it costs to run private wells,” she said.

The Army intends to pay for constructing the water system and for operating it for four years until an agency is formed to take it over.   It will continue monitoring contaminants over the next 20 years.  It will also pay for closing residents’ wells and connecting them to the new supply.

“The residents understand that everyone pays for water one way or another,” Kenney said.  “There’s the cost of electricity for pumping the water and the cost of treating the water.”

The Army is investigating the potential for installing the municipal water system from a well northeast of Badger.

If the municipal water is approved, the Wisconsin DNR will begin assessing the well for water safety, said Jeff Ackerman, a hydrogeologist with the WNDR’s Remediation and Redevelopment program.

“So far the Army has supplied us with preliminary tests for this well and they have informed us that there’s no problem at all,” Ackerman said.

How about the crops and fish?

The review which will determine what option the Army will pursue ends early August.

One thought on “Army’s plan replaces, not restores polluted water in Wisconsin”