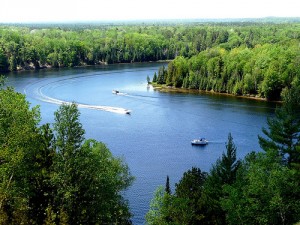 A report commissioned by Anglers of the Au Sable details the environmental risks of gas drilling and oil pipelines in the Au Sable River watershed Photo: mtsn vis Flickr

Protecting northern Michigan trout streams from the potential threats of oil and gas development will take some watchdogging by a fishing and conservation organization, according to a report commissioned by the group (PDF).

The group, Anglers of the Au Sable, has a history of going to court over oil and gas issues. To prepare for what could come next, the group commissioned author and former Muskegon Chronicle reporter Jeff Alexander to investigate gas and oil infrastructure in the region and a controversial method of natural gas extraction that could become more common there.

Alexander and Anglers vice president John Bebow are listed as authors, and they explain in the report that it isn’t an “anti-oil industry manifesto.” They keep it from reading like one with multiple statements conceding the importance of the industry in northern Michigan.

For example: “Pumping millions of gallons of oil across thousands of miles of land and many lakes and rivers on a daily basis keeps the region’s economy running smoothly,” and, “Oil and gas exploration has long played an important role in northern Michigan’s economy and will continue to provide revenue and jobs for the foreseeable future.”

Yet the report remains a frank assessment of the oil and gas industry’s potential impacts on northern Michigan’s riverine resources.

The report gives a lot of attention to a 58-year-old oil pipeline that travels under the Au Sable and two of its tributaries. The pipe is owned by Enbridge Energy, which also owns the pipeline that ruptured in July 2010 and spilled 800,000 gallons of oil into Talmadge Creek and the Kalamazoo River.

Several inspections in the last decade show the pipe is in good condition, according to federal records and Enbridge officials. The authors call the company’s response to Angler’s concerns over the risk of a potential spill “swift and thorough.”

Yet the report cites eight incidents where problems with Enbridge pipelines have cause millions of dollars in damage and caused two deaths. Also detailed are the severe consequences of a hypothetical spill on the Au Sable.

“According to federal government documents obtained by Anglers of the Au Sable, a worst-case scenario could result in a spill of 1.5 million gallons of light crude into the Au Sable River in eight minutes,” according to the report.

That’s nearly twice as much oil than what leaked into the Kalamazoo River over the entire course of the spill. Additionally, the Au Sable’s cold-water ecosystem is more fragile, its fishery is more valuable and its slower flow would take longer to flush the oil out.

The report also covered the concern over a potential boom in northern Michigan of a controversial method of natural gas extraction called hydraulic fracturing, or fracking. The method allows drillers to get to natural gas within shale deposits like the Collingwood shale formation that runs through northern Michigan and under the Au Sable.

State records show fewer than 10 wells have been drilled into the Collingwood so far and none were within the Au Sable watershed, according to the report. But at a state mineral rights auction in October 2010, an energy company with a history of fracking bought the rights to drill in thousands of acres near the Au Sable and Manistee Rivers.

Concerns about fracking raised in the report include:

State officials have said that fracking is safe and well regulated, and that Michigan is well suited for it, according to the report. Officials said the state has high standards for casings that separate wells from the ground they’re drilled through, and a thick layer of rock separates the Collingwood shale from important aquifers.