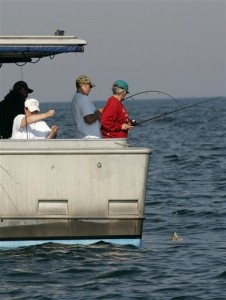 The Environmental Protection Agency declined to ban the use of lead fishing tackle and ammunition. Photo: AP Images

A call for a ban on lead fishing tackle and ammunition was recently rejected by the Environmental Protection Agency, which said there was no proof that it would protect the environment.

Environmental groups petitioned the EPA in August to prohibit “the manufacture, processing, and distribution” of lead in bullets and fishing gear.  In response to the American Bird Conservancy, EPA Assistant Administrator, Stephen Owens, cited steps already  undertaken to curb lead use: limits on federal land, state regulation, education efforts and the increasing availability of non-lead alternatives.

The EPA denied the ammunition portion of the petition two months earlier because the agency didn’t have authority under the Toxic Substances Control Act to regulate it.

Already considered dangerous enough to warrant its own EPA webpage, lead can cause a range of health effects to wildlife, from acute poisoning and death to long-term problems such as reduced reproduction, stunted growth and neurological damage.

The Wisconsin Department of Natural Resources presented a plan for reducing lead impacts in October. It acknowledged the impact of lead on wildlife – poisoning has been reported in 15 species – and focused on education and internal measures to reduce it.

“There is an outreach component, but we are really looking to lead by example,” said Ed Culhane, public affairs manager with the Wisconsin DNR.  “These are not regulatory steps being taken.”

The plan includes partnering with gun ranges to encourage non-lead bullets, expanding lead information on the DNR website and including lead training at hunter education courses. The department will reduce its own use by requiring non-lead alternatives for fishing tackle loaner programs and for ammunition used by DNR employees.

The Minnesota DNR has a “Get the Lead Out” section on its  website that outlines lead dangers, and helps hunters and anglers  find makers of non-lead bullets and fishing tackle.

The only Great Lakes state to take regulatory action is New York. It bans the sale and use of lead sinkers weighing less than half an ounce.

Many fishing and hunting organizations – including the American Sportfishing Association and the NRA – opposed the ban and welcomed the EPA denial.

“We did not believe it was necessary,” said Amy Trotter, resource policy manager for the Michigan United Conservation Club, a statewide conservation organization comprised of many hunting and fishing groups.  “Waterfowl and fish face much greater threats than lead.”

Those greater dangers include “fragmented and lost habit, and shoreline development,” Trotter said. The expense of non-lead alternatives was another complaint by Trotter, frequently voiced by others in opposition.

The petitioners provided almost 500 peer-reviewed studies that proved the toxic effects of lead on fish and wildlife and was signed by the American Bird Conservancy, the Center for Biological Diversity, the Association of Avian Veterinarians, Public Employees for Environmental Responsibility and Project Gutpile.

The ruling came down from the EPA right after the department’s “National Lead Poisoning Prevention Week,” an irony that Darin Schroeder, vice president of conservation advocacy for the American Bird Conservancy, voiced frustration over in a press release.

“The EPA has chosen to ignore the unregulated pumping of lead into the environment for sport in the face of mountains of scientific data that say we are poisoning millions of birds each year, and now is asking us to be mindful of the poisonous impacts of lead,” he said.