By Alice Rossignol and Rachael Gleason

We asked you to tell us which aquatic invasive species  are the most ecologically destructive to the Great Lakes.

And Round 1 results are in.

Last week, we introduced the Zebra “The Big Z” Mussel and the Quagga “The Quagmeister” Mussel — two mussels that filter vast amounts of water, disrupt the food chain and attach to surfaces like water intake pipes.

And the winner is… 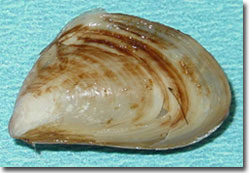 Sixty-nine percent of readers who submitted brackets said that the quagga mussel was worse for the lakes, about 65 percent of you who voted concurred.

And David J. Jude, a biologist at the University of Michigan, agrees that the quagga now out-proliferates the zebra mussel.

Or as Scoop, an Echo reader, put it, “Quaggas are far more numerous these days so I vote that they’re the new bad boys (and girls) of the sea.”

Unlike zebra mussels, quaggas can attach to soft surfaces, like lake bottoms. A lack of this fighting skill limits The Big Z’s impact.

“The quagga mussels came in, they can just sit on soft substrates. As a result, they have been able to…essentially blanket the bottom of the lakes,” Jude said.

Scientists have noticed that this benthic habit of attaching to lake bottoms messes with occurrences like plankton blooms by feeding on large amounts of aquatic plants.

On a more positive note, both mussels play roles as food sources for fish like the whitefish.

But that doesn’t seem to outweigh the destructiveness of the two, especially the impact of the Quagmeister.

The zebra may be more famous because it established itself first, Jude said, but the quagga is more destructive.

And moving on to the plant species.

The Eurasian “The Eurasian Invasion,” Watermilfoil and the Curly-leaf “The Leaf-o-Nater” Pondweed are aquatic plants that outcompete native species using fighting skills like blocking out sunlight, creating algal blooms and making water recreation a true challenge.

And the competitor to advance is… 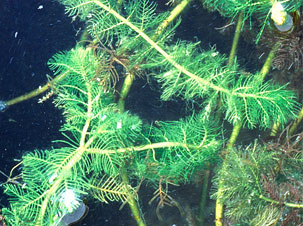 Seventy-eight percent of voters and 80 percent of those who submitted brackets chose the watermilfoil.

“They are both problems in their own right,” said Luke Skinner, an invasive species program supervisor at the Minnesota Department of Natural Resources.

Once the pondweed dies, the nutrients it expels can cause algal blooms. It also starts growing earlier than native species under sheets of ice.

But the watermilfoil poses problems year-round.

“The milfoil, once established, provides persistent nuisance problems all year round, right into the fall,” Skinner said.

The watermilfoil is also harder to remove from boats and waterways that it entwines in its tendrils.

“It’s been a more persistent problem. It tends to be harder to remove from boats – as people are moving boats from lake to lake. It clogs up waterways,” said Martha Carlson, a research ecologist at the U.S. Geological Survey Great Lakes Science Center.

Congratulations! Sixty-five percent of bracketeers are still in the running for a SmackDown! prize and bragging rights.

It’s too late for brackets but please continue to vote and debate for your choices.

And don’t forget to tell your friends.