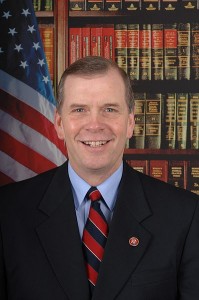 Tim Walberg's (R-MI) bid to return to the U.S. House repeat appearance on the "Dirty Dozen." Photo: US Congress

The League of Conservation Voters is only two thirds of the way through filling out its 2010 “Dirty Dozen,” the group’s list of Congressional candidates with unimpressive voting records on clean energy and the environment. But candidates from Great Lakes states have already nabbed three of the eight spots.

The lineup so far:

Tim Walberg (R-MI): Smilin’ Tim Walberg (pictured at right) opposed 32 of 33 pieces of environmental legislation the last time he was in office, including the No Child Left Inside Act, an environmental education program.

Michelle Bachman (R-MN): A few gems from Bachman herself: “The big thing we are working on now is the global warming hoax. It’s all voodoo, nonsense, hokum, a hoax,” and, “I want people in Minnesota armed and dangerous on this issue of the energy tax because we need to fight back. Thomas Jefferson told us, having a revolution every now and then is a good thing.”

Pat Toomey (R-PA): “Pat believes that protecting our environment is critically important,” according to his campaign website. That’s why he supports drilling in the Arctic National Wildlife Refuge in Alaska and Pennsylvania’s Marcellus Shale.

John Pappageorge, Republican running for Michigan State Senate District 13: Pappageorge voted to weaken Michigan’s environmental laws and limit the state’s surprise inspections of potentially contaminated facilities. But he does have a great last name for a pizza place.

Tom Emmer, Republican running for Minnesota Governor: “All Minnesotans have an interest in keeping our water and air clean,” Emmer said in a press release on agriculture regulation. That must be why he voted against the state’s requirement for utilities to generate 25 percent of their energy from renewable sources by 2025, then wrote a bill to repeal it after it passed.

Bill Stachowski, Democrat possibly just sitting somewhere in New York: Whatever he did to become the only Democrat on the list must have been good. He’s already dropped out of the race.