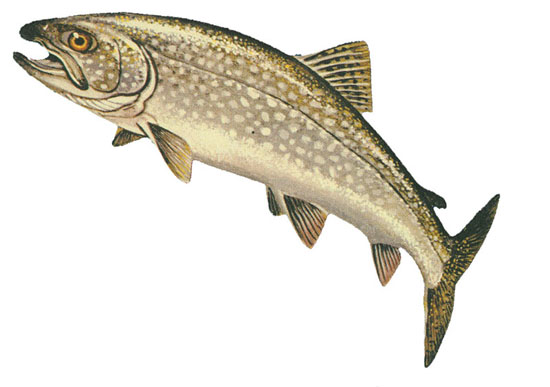 Any lake trout pulled from the wild blue waters of Lake Michigan now was probably born in a government building.

That’s despite a 45-year-old, multi-million-dollar program aimed at restoring a self-sustaining, naturally reproducing population of what was formerly the Great Lakes’ top predator.

Lake trout were wiped out in most of the Great Lakes by the mid-1900s as a result of overfishing, invasive species and habitat destruction. Managers started stocking them in Lake Michigan in 1965.

After little success, a 1985 revamp of the plan focused stocking on two relatively shallow, rocky sections of Lake Michigan where fishing for the species was banned.

At least part of that overhaul has proven fruitless, according to a study published recently in the North American Journal of Fisheries Management.

Low stocking numbers, two invasive species and even a native fish are all to blame.

The study reports 14 years worth of lake trout surveys within the northern-most of the no-fishing zones. 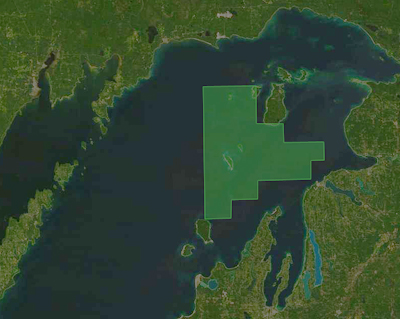 Biologists looking for baby lake trout in this 860-square-mile Lake Michigan refuge where fishing for the species is banned found none in 14 years of looking. Photo: UW-Madison

It covers 860 square miles around a series of islands northwest of Michigan’s Lower Peninsula. The area’s rocky reefs are ideal for lake trout eggs.

Biologists dragged nets around the refuge scouting for wild lake trout less than a year old. Finding such a young fish means that it was probably born nearby. That helps measure the area’s productivity as a lake trout nursery.

But in 14 years of looking, they found none.

A 2008 survey turned up six adult wild lake trout, but biologists guess that they were already four years old. It’s less likely that they were born in the refuge because no two- or three-year old wild fish were caught in the years before.

“Some people suspect they were just ‘swimovers’ from Lake Huron,” Madenjian said.

The restoration program is working better in Lake Huron, where some biologists claim that nearly 30 percent of the lake trout caught are born there naturally.

Biologists have found baby lake trout in other parts of Lake Michigan, but don’t have any evidence that they’re growing into adult fish like they are in Lake Huron.

So what’s the holdup with Lake Michigan?

For one, the lake still has an abundance of alewives, an invasive fish that eats baby lake trout. What’s more, adult lake trout that eat too many alewives develop a vitamin deficiency disorder and have feeble babies.

Alewives recently crashed in Lake Huron, which likely paved the way for the lake trout resurgence there.

“Given what’s going on in Lake Huron in the recent years, comparing it with Lake Michigan, you can’t help but think that alewives are mixed up in it somehow,” Madenjian said.

Another problem is that the rate at which sea lamprey, another invasive species, were chewing holes through Lake Michigan lake trout doubled over the study period.

Biologists initially thought the St. Mary’s River between lakes Superior and Huron was the major hotbed of lamprey reproduction, said Mark Holey, the project manager for the Green Bay Fish and Wildlife Conservation Office of the U.S. Fish and Wildlife Service.

But when they treated it with lamprey poison, only Lake Huron benefited. Lake Michigan lampreys were coming from elsewhere.

“Lo and behold, as it turns out, the Manistique River was producing a lot lampreys that were not being treated,” Holey said.

A third hurdle for lake trout on the northern refuge is the burbot, a native fish that biologists caught feeding on recently stocked lake trout.

While Lake Michigan managers are hesitant to reduce the issue of lake trout restoration to a matter of how many fish are stocked, all these obstacles add up to what the study authors call a “threshold effect.” That means that the species doesn’t have a chance if enough hatchery fish aren’t dumped in the lake to overcome everything working against them.

The good news is that after a dip in the number of lake trout stocked on the refuge’s reefs in the late 1990s and early 2000s, managers have been planting more and are planning another boost in the future, according to Jim Dexter, the Michigan Department of Natural Resources and Environment’s Lake Michigan Basin Coordinator.

The extra fish will come from stocks normally planted closer to shore where they were more vulnerable to anglers and commercial fishing nets.

The four U.S. Fish and Wildlife Service fish hatcheries that supply 95 percent of the Great Lakes lake trout have a combined annual operating budget of around $3 million, said Todd Turner, the deputy assistant regional director for fisheries in the agency’s Midwest office.

“We can say that that’s been fairly steady now for the past 6 to 8 years,” he said. “Prior to that it’s been a little bit less.”

Lake trout restoration is could bring some ecological stability to the lakes, said Dexter. But the effort has taken a long time and diverts resources from restoring other species like lake sturgeon.

“If we can ever get to the point of having a naturalized population that is self sustaining, then those staff efforts and those financial commitments that have gone to that program can now be switched to something else,” he said.