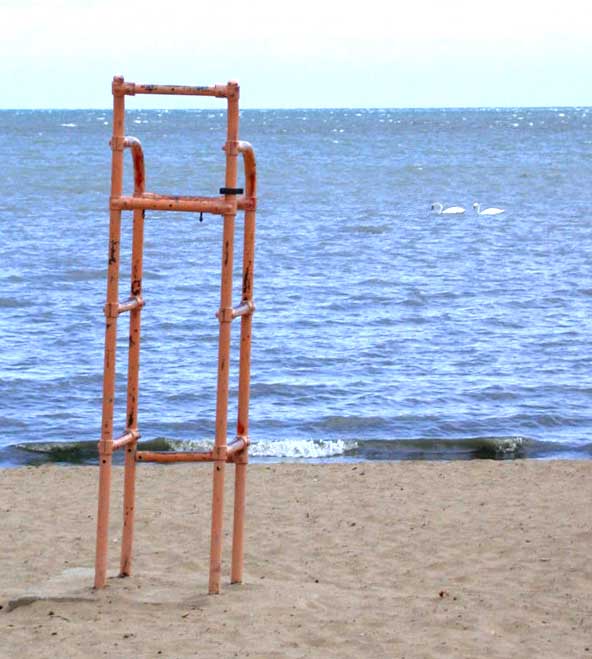 St. Clair Shores beaches in Michigan were named as some of the "dirty dozen." Photo: Matthew Trump.

Great Lakes states placed in the bottom two-thirds of 30 states ranked recently by their 2009 beach water quality by the Natural Resources Defense Council.

Beach water quality was determined by the percent of state water samples that exceeded a federal standard for bacteria levels.

Minnesota ranked first for the Great Lakes states and 12th overall. Illinois was last in the region and 28th overall. Five percent of Minnesota’s samples exceeded the federal standard compared to 16 percent of Illinois’.

But beach experts say that states that test beaches more frequently may be ranked lower.

Illinois officials blame its low ranking on the frequent, often daily, beach water tests the state does during the beach season.

Experts claims that Illinois tests frequently in the interest of the public, but the report’s rankings don’t reflect this effort.

“If we wanted to look better in their report I just could reduce the number of days we monitor to once a week and we’d see those numbers fall. But we don’t think that’s the right thing to do for public health,” said Justin DeWitt, chief of general engineering of the Illinois Department of Public Health.

The defense council acknowledges that comparing states to a common standard when sampling practices differ can affect how they line up.

“Which is why the report emphasizes that a high state ranking does not necessarily mean a state’s practices fail to protect public health,” Jon Devine wrote in an e-mail. Devine is a senior attorney of the Natural Resources Defense Council’s water program.

To get a more accurate picture of a state’s beaches it is best to focus on year-to-year changes within each state rather than compare them, Dorfman said.

Dorfman says that emphasis should be placed on the fact that there is dirty water at beaches, not on the rankings.

“It’s not a perfect science, none of this is perfect. You know the overall goal is to put a focus on the fact there is sewer and storm water getting into the water and, you know, to protect public health these issues need to be dealt with,” he said.

Minnesota doesn’t give much thought to the report.

“We haven’t given a whole lot of attention because it doesn’t really affect what we do and how we do it,” she said.

Despite disagreements on the report’s calculations, it is clear that there are dirty beaches out there.

But it’s compared to beaches that were tested as few as ten times in 2009. Jeorse beach water was tested 78 times.

Jeorse Beach I is labeled by the defense council report as one of the Great Lakes “dirty dozen” — beaches where samples exceed the federal standard the most often. Half of the ‘dirty dozen’ were tested 2 times or fewer a week.

“If you really start digging in the numbers and doing a little bit of math on your own I think you’d find that Illinois and some of the other folks that have been tagged as ‘the dirty dozen’ really are just beaches that care about public health,” DeWitt said.

The report highlights the challenges in monitoring water quality and keeping swimmers healthy.

Tests for bacteria like e coli take 18 hours to deliver results, so beaches often close based on water quality tests done the day before.

“We’re really handcuffed by the system that we have, which is using day-old information to try to make decisions about people swimming or not swimming,” DeWitt said.

To resolve this, Illinois invests in computer systems to predict water conditions days in advance.

“We really think that’s where we need to put our eggs, if you will, in that basket of trying to do more predictive modeling and if the rapid testing methods become available and their cost effective,” DeWitt said.

And this forecasting is something that DeWitt says they’re one of the best at.

“I think we would certainly argue that we’re leading the nation in terms of doing predictive modeling work,” DeWitt said.

In Lake County, Ill., five beaches have predictive modeling systems. Here, water data is collected on location rather than from outside sources like the National Oceanic and Atmospheric Administration. That makes predictions more accurate.

“We are truly taking it to the beach specific level not just trying to look at it regionally and saying, well we think today will be a good day in this region without really definitively knowing that’s true at a specific beach,” DeWitt said.

Prevention of beach water pollution, says the report, is the best way to keep water clean and beach-goers healthy.

“Prevention is the best way to make sure that a day at the beach will not turn into a night in the bathroom or, worse, in a hospital emergency room,” says the report.