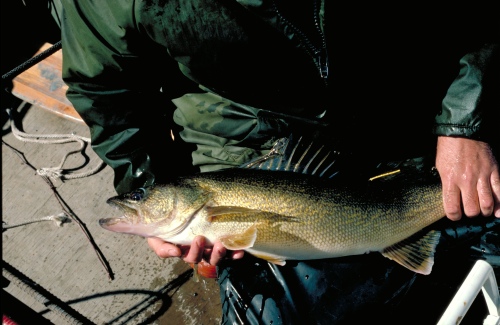 Climate change is shifting walleye reproduction schedule, which could have the larval fish hatching when there's nothing to eat. Photo: Roger Klindt

Long-term warming of the Great Lakes climate is melting the ice from Minnesota lakes earlier in the year.

As those “ice-out” dates move farther up the calendar, they may be disrupting the reproduction of a popular sport fish, according to a recent study in the journal Transactions of the American Fisheries Society.

“Each day ice-out gets earlier, walleye spawning tends to get a day to half a day earlier,” said Ray Newman, study co-author and professor of fisheries, wildlife and conservation biology at the University of Minnesota.

It’s not yet clear how that will affect the fish, but it has the potential to cause a few problems, he said.

First, if walleye spawning occurs too early, baby fish might hatch before the food that they depend on is available. But that won’t be a problem if climate change also bumps up production of the tiny plants and animals the little walleye eat.

Second, survival of stream-born baby walleye is tied to water conditions like depth, speed and muddiness. Those factors change dramatically in the spring as melted snow and seasonal rains flow into streams.

If an earlier ice-out has walleye hatching before stream conditions are just right, the fish might not make it.

Though the study focused on inland lakes in Minnesota, the lessons learned could also apply to walleye swimming in the Great Lakes, Newman said.

The effect of climate change on Great Lakes ice cover is often couched in terms of water levels. Warmer temperatures mean less ice on the lakes. The ice that does form melts earlier. The open water evaporates and the lake levels drop.

But this study is a reminder that changing ice cover patterns can have direct biological impacts on the Great Lakes, too.

“I think you could expect with a number of things there may be somewhat similar responses,” Newman said. “One of the populations of walleye in the St. Louis River goes into Duluth-Superior Harbor and into Lake Superior.”

“Clearly the lake has been warming up,” he said. “So that’s going to have further implications for fish populations.”

Though the study may bear bad news for some of the region’s fish, the methods the researchers used are a bright spot for wildlife biologists studying climate change, according to Newman.

The researchers used records of ice-out dates from the Minnesota Ice Cover Database and other organizations. These records weren’t kept with climate change in mind. But they’ve still proven useful for studying warming.

“These long-term data sets that are collected by agencies end up being useful to get an idea of what’s happening with our resources and potential response to climate change,” Newman said.

That’s not news to John Magnuson, emeritus professor of zoology at the University of Wisconsin. Magnuson has used historical records showing earlier and earlier ice-out on Wisconsin lakes to demonstrate that not only is climate change real, it’s already having impacts.

It’s a simple way to illustrate a complex topic.

“You don’t need a climate model,” Magnuson said. “You don’t even need a thermometer.”

Ongoing research by the Minnesota Department of Natural Resources on another set of long-term data sets seems to show that bass and sunfish – considered warm water species – are getting more common in the northern lakes in Minnesota, Newman said.

“They seem to expanding their range northward,” he said.