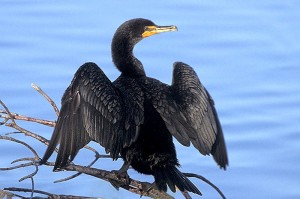 The double-crested cormorant is eating more round gobies and fewer sport fish, a recent study says.

The black waterbird bird mostly ate the invasive round goby instead – more than 70 million of them throughout the study.

Researchers analyzed more than 10,000 regurgitated cormorant pellets, that contain undigested stuff like fish bones, on Pigeon and Snake islands, according to research published in the Journal of Great Lakes Research.  Those islands – both in Canadian waters of Lake Ontario – have the second and third largest cormorant colonies in the lake’s eastern basin.

To get an idea of how cormorant diets changed after the goby invasion, researchers examined cormorant pellets from 1999 to 2007, covering the “pre-goby years” before 2002 and “post-goby years” up to 2007.

After the cormorant started eating gobies, the invasive fish made up about three-quarters of the birds’ diet in each colony.

Before this shift the cormorant mainly ate sport fish like the yellow perch and the smallmouth bass, a diet that’s aggravated sport fishermen.

Diet measured by number of fish

“Because gobies may be smaller, it may not be as dramatic as the numbers might appear. But, there’s no doubt about it. There’s a lot fewer yellow perch being consumed,” said James H. Johnson, one of the study’s authors. Johnson is an ecologist and eastern branch chief of the U.S. Geological Survey Great Lakes Science Center.

And this observed diet shift isn’t unique to these colonies.

“If you just look at yellow perch, they’re clearly reducing the predation pressures on fishes that were of concern to folks,” Johnson said.

This shift to the goby is no surprise. The cormorant is a highly opportunistic predator.

“Whatever is most abundant, they will take advantage of that,” LaPan said.

Cormorants eat so many sport fish that the bird is now a nuisance to fishermen. Such a nuisance, that many states now control the bird’s population through shooting and egg oiling.

“The general sentiment among fisherman toward the cormorant population is pretty negative,” said Chad Lapa, who’s been fishing on Lake Ontario for 28 years and owns Lake Ontario United, a website dedicated to fishing and other sports. 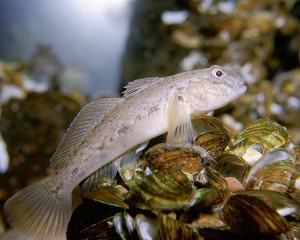 The round goby, an invasive bottom feeder, has become the main dish for cormorants. Photo: Eric Engbretson.

But the goby isn’t a dream date either.

“As soon as your bait would hit the bottom it would be chomped by these gobies,” Lapa said.

“The goby introduction was pretty scary initially because they ended up decimating the bass population in the lake,” Lapa said. “And they really hurt a lot of the smaller, spawning fish.”

The cormorant’s new eating regime and its new fish du jour may alleviate some pressure on sport fish, revealing a potential positive in the arrival of this invasive species.

“Well, I think it we’d be all much better off if round gobies weren’t here,” Johnson said. “One of the side benefits is that they’re deflecting some of this avian predation pressure.”

A goby decline could shift diet back

When an invasive species enters a new environment, its population skyrockets before it uses up available resources and crashes. The sampling done during Johnson’s study probably occurred before this typical crash, so more gobies were available for cormorants to eat.

If goby populations decline the birds could switch back to sport fish.

“Its certainly plausible that the cormorants could go back,” LaPan said.

There is evidence of a goby population decline in New York waters over the past two years. But since the invader is still new to the area, predicting what it will do in the future is difficult.

“It’s kind of hard to say what will happen because it’s a newer species,” said Maureen Walsh, a research fishery biologist of the U.S.G.S. Great Lakes Science Center.

But if gobies are around, the adept cormorants will probably make them a meal.

“The gobies are going to be a permanent item in the diet, in cormorant diets. They found them, they’re going to be continually utilizing them,” Johnson said.

But the cormorant and the round goby both hurt sport fish populations and fishermen like Lapa have difficulties finding the positives in either.

“It’s tough. I think it’s just a real sticky relationship. It’s a very mixed feeling,” he said. “Fishermen don’t like gobies and fisherman don’t like cormorants and having them kind of off-setting themselves, it’s hard to convince a fishermen that this bird will help the lake.”