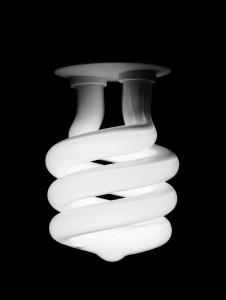 Compact fluorescent light bulbs are energy efficient, but could pose public health risks if not disposed of properly.

The Michigan State Medical Society recently warned  residents of the dangers of not properly disposing of the bulbs.

The mercury contained in the bulbs can cause public health hazards, society representatives say.

When mercury enters the environment, bacteria can transform it into methyl mercury. Methyl mercury exposure has been linked to birth defects and impaired brain and nervous systems.

Small amounts of mercury are found in all fluorescent bulbs, said Joel Wiese, director of marketing for Michigan Energy Options in East Lansing.

The organization is non-profit and focuses on promoting quality energy efficiency.  It has run the Change a Light, Change Michigan program since 2006, which encourages residents to replace old incandescent bulbs with CFLs.

“The biggest risk is with handling or breaking (fluorescent bulbs),” Wiese said.

He said when bulbs break, people should open windows in the area and leave for 15 minutes, according to U.S. Environmental Protection Agency standards.

People should also recycle all bulbs properly and not throw them in the trash, Wiese said.

The Michigan State Medical Society said LED bulbs are a good alternative to CFLs because they contain no mercury and can provide greater energy savings.

“LED bulbs are more expensive than fluorescent bulbs and not mainstream. The process has to mature a bit more,” McCann said.

He said LED bulbs tend to shine light straight up, which limits the lit area.

For more information on how and where to go to recycle CFLs, go to www.michiganenergyoptions.org.

© 2010, Capital News Service, Michigan State University School of Journalism. Not to be reproduced without permission.