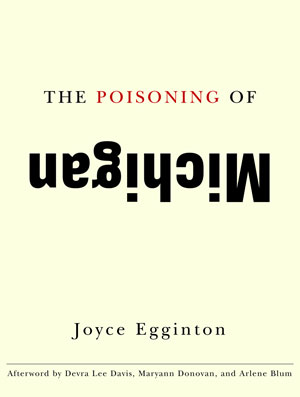 The accidental poisoning of Michigan dairy cattle in the 1970s sparked the largest chemical contamination in United States history.

Nine million residents consumed contaminated meat and milk for a year after a Michigan chemical plant mistakenly added PBB (polybrominated biphenyl) – a toxic fire retardant – to dairy cattle feed, and distributed it to farms throughout the state.

In the Poisoning of Michigan – published 30 years ago – investigative reporter and author Joyce Egginton sheds light on the PBB disaster and how federal and state authorities failed to respond.

PBBs were banned in 2003, but equally toxic substitutes are still commonly used. The Michigan State University Press reprinted Egginton’s book last August to draw attention to the subject once again.

In a phone interview from her home in New York, Egginton discusses the impact of the book 30 years later and how the risk of chemical contamination is a long-lasting concern.

Q: What sparked the story?

A: “One day I picked up the New York Times and there was, way tucked on an inside page, a very insignificant-looking story placed down the bottom of the page. It talked about the fact that there had been a contamination in Michigan and that it was estimated that everybody in the state had, by this time, drunk contaminated milk and eaten contaminated meat. And I thought, immediately, why isn’t anybody taking more notice of it? So I proposed that I should go out there and write it, and I did.”

Q: What was the immediate impact of the PBB contamination?

A: “What had happened is that the whole quantity of PBB had gotten mixed in cattle feed. It was the biggest cattle feed plant in the state of Michigan and farmers from all over the state ordered their feed from there. With any sort of poison that people are slowing taking, the symptoms started appearing gradually.

“At first, it didn’t seem too bad. Then, after a few weeks or months, farmers were saying their cows were aborting and cattle were dying. Cows began looking deformed: their coats were mangy and their hoofs would overgrow. The farmers did the obvious thing of going to the Department of Agriculture and saying, ‘I’ve got a problem here. Can you help me?’

“The general view presented to them by the Department of Agriculture at that time was well, ‘You must be doing something wrong.’ Because in the early days, the symptoms that the cattle showed could have been put down to bad husbandry or poor feeding methods. Farmers weren’t talking to each other about their troubles.

“It was over a year before the state acknowledged that the problem existed. And even then, it didn’t know how to handle it. I’m not saying that in any way blaming the state of Michigan, but simply, this was something so widely outside their experience that there was no way they could know what to do. It’s like a bunch of doctors faced with a brand new disease. They started looking at the diseases they knew rather than looking for something they didn’t know.” 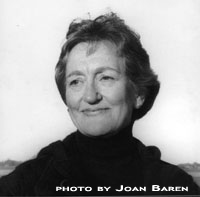 Joyce Egginton was a foreign correspondent for a British newspaper when she first wrote about the PBB crisis. Photo: Michigan State University Press

Q: Why was the PBB crisis underreported when it happened? Do you think it’s been covered fairly since then?

A: “Even at that time, although it was this little downpage story in the New York Times, there was nothing in any of the Detroit papers. The Grand Rapids Press started covering it very early, and did a good job. A monthly magazine called the Michigan Farmer did, but nobody else that I could see. At the beginning, it was thought to be the complaints of farmers that couldn’t be substantiated.

“It was an enormous story and no one was interested. I’m still, all these years later, amazed that that story has not been more widely told. Here is the biggest recorded contamination alone in this country – one that affected nine million people – and where have you read much about it?

“Not long after it happened, there was a story of contamination in a place up in New York state called Love Canal. It was a modern housing estate that had been built on top of an old toxic dump. Everybody had been told the dump was sealed and safe, and it wasn’t. After some years, the toxins from the dump started permeating into people’s homes and there was a high degree of illness, particularly among children.

“Now that got a lot of attention – a huge amount of attention. I reported on Love Canal. It was all contained in one place. It was easy to find people to interview because were all living in adjoining streets. They were all activists in the fight against the whole contamination issue.

“When you had come to report the Michigan story, what have you got? You got a farmer here, another farmer 50 miles away, another farmer a long drive across the countryside. I drove hundreds of thousands of miles crisscrossing Michigan, interviewing farmers. Newspapers don’t give that much time to a story. It took an awful lot of time. It wasn’t easy. Is that why it didn’t get better reported? I often wonder how many stories are easier to report get reported much better because of that.”

Q: What were the hurdles to gathering and presenting the material?

A: “I really had to learn how to report differently from the way I had been taught. This is true of any environmental reporting. As a journalist, I had been trained that once you get a story, always check it out with the authorities. Here you get a story that you go to the authorities – the Department of Agriculture and Farm Bureau – and they’re telling you, ‘Oh, look, he’s making a lot of fuss, we know about him. His farming methods aren’t that great.’

“That was a huge obstacle. It was an obstacle for me because I didn’t know about dairy farming. I studied it as hard as I could, and as quickly as I could, but I think it was an obstacle that daunted a great many journalists in the state. I always remember that the head of the Department of Public Health in Michigan saying later, several years later, this was something beyond their comprehension.

“He used the phrase: ‘We were mired in a swamp of ignorance.’”

A: “This event in Michigan did cause PBB to be outlawed. It’s never been made since. And so there is a general reaction, ‘Well, Thank God.’ It’s caused this trouble – it’s no longer a menace.

“Now, one discovers, that what replaced PBB is a great variety of similar chemicals that are used as fire retardants without real testing on the market. They’re not tested on people and many of them aren’t even tested on animals. And they’re terribly widely used.

“This country has the highest incidents of these kinds of chemicals being found in people’s bodies. They’re used as fire retardants in practically every home. For example, it’s in the kind of foam rubber that is used in mattresses and armchairs. It’s used in carpets and drapes.

“Doing the job it’s said to do is a huge amount of overkill. OK, it’s a fire retardant but it’s poisoning people the whole time. It’s a good example of trying to come up with a preventive before you really find out what dangers the preventive can pose. I thought it’s about time to draw some more attention to that.”

Q: How would you have approached this book in 2010?

A: “In some ways, it would be easier to cover because there’s more knowledge in place. When they tried to settle this one by a lawsuit on behalf of the farmers there was no such thing as environmental law. Now, there’s more protection for the public. But the more protection is coming at the same time as the more exposure. The one is never catching up with the other.

After the statewide PBB contamination, the chemical plant at fault, owned by a company now called Velsicol Chemical Corp., became a federal Superfund site due to contamination of a nearby river. See what an environmental policy expert has to say about its cleanup.