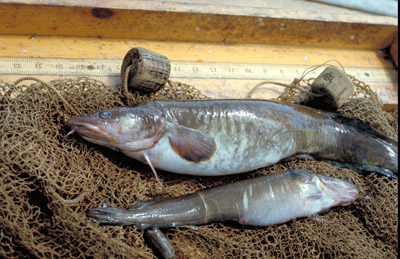 Burbot — slimy fish with a habit of wrapping themselves around anglers’ arms — have never been a popular commercial or sport fish. Photo: Minnesota Sea Grant.

They’re also called threatened in many parts of the world, according to a report co-authored by Stapanian and published in the March issue of the journal Fish and Fisheries.

That makes the story of the species’ Great Lakes collapse and recovery even sweeter.

But new research shows that the burbot revival could also hamper the multi-million dollar effort to restore lake trout, another Great Lakes native.

In the 1950s, commercial fishing and invasive sea lamprey wiped out Lake Michigan’s lake trout. Burbot populations dropped drastically, too, but the species hung on in small numbers. Biologists think that’s at least partly because burbot were never a popular target for commercial fishers.

That means that for every pound of burbot caught and reported, commercial fishers pulled in another 90 pounds of lake trout.

The small commercial burbot harvest doesn’t mean that the burbot weren’t in the lake.

“There were a lot more burbot than that in the lake,” said Randy Eshenroder, a science adviser with the Fishery Commission.

The lack of commercial interest may have helped Great Lakes burbot through tough times, but it’s also gotten the fish in trouble around the world.

“The overall lack of commercial and sport interest in burbot has undoubtedly contributed to its being ignored or regarded as a ‘trash’ fish by some management agencies,” according to the Fish and Fisheries article.

Burbot populations were listed as “secure” in only four of the 24 Eurasian countries surveyed in the report, and 10 of the 25 U.S. states.

In the Great Lakes, management apathy toward burbot has played out much differently.

The lakes’ burbot couldn’t have rebounded without the massive sea lamprey control program coordinated by the Great Lakes Fishery Commission, Stapanian said. The drop in invasive alewives, which feed on burbot larvae, was also essential. But burbot have recovered in all of the lakes except Ontario (where alewives are still too plentiful) without the help of a stocking program, Stapanian said.

That’s not the case for other Great Lakes natives.

Since 1965, managers have stocked Lake Michigan with an average of 2.7 million lake trout per year in an effort to reestablish a naturally reproducing population. Since 1986, many of those fish have been stocked in the lake’s two lake trout refuges where fishing is off limits.

The refuges are relatively shallow and have rocky bottoms that were historically fruitful lake trout spawning sites. Biologists hope that the fish will return to the refuges once they are fully grown and lay eggs.

So far, it hasn’t worked very well. Biologists aren’t exactly sure why, but they often point to invasive species like sea lamprey and alewives.

But a new study to be published in the Journal of Great Lakes Research shows that the resurging burbot may have something to do with it.

One of the lake trout refuges sits between Michigan’s Leelanau Peninsula and Beaver Island. People are particularly interested in getting lake trout to spawn there, said Greg Jacobs, a biologist with the U.S. Geological Survey’s Great Lakes Science Center.

“So we wanted to get a good idea on whether burbot might have an effect on that,” he said.

To do that, Jacobs and his colleagues checked the stomachs of 95 burbot caught in northern Lake Michigan from 2006 to 2008. When they checked burbot caught near lake trout stocking sites, they found the effect they were looking for: Burbot eat small lake trout.

It’s not yet clear how big of a drain burbot are on lake trout stocking, Jacobs said. That’s because no one is sure how many burbot are hanging out around the lake trout refuge.

But there have been a few studies on burbot densities in other lakes and even other sections of Lake Michigan. Those studies give scientists a range of how many burbot might live in a given area.

If northern Lake Michigan burbot are on the high end of that range, it could be lights out for the refuge’s lake trout.

“It could be entirely possible that they could eat all of the lake trout that are stocked out there within 30 days,” Jacobs said. “Which is about the time it would take for a lake trout to grow large enough to be able to escape those burbot.”

Any stocked fish are an easy target for predators already in the lake, Eshenroder said.

“They’re coming out of hatcheries, they’re naive, kind of bewildered, you might say,” he said. “They’re disoriented.”

It’s also possible that there aren’t enough burbot to eat all the lake trout. But even if there are only enough to take out a quarter of the stocked fish, that would still put a dent in lake trout restoration, Jacobs said.

Biologists need more research on burbot density and behavior before they can be sure how big that dent is.

“Until recently, there hasn’t been a lot of real good burbot research,” he said. “Mostly because nobody’s really interested in catching them.”