Six Great Lakes states — Michigan, Ohio, Indiana, Minnesota, Wisconsin and Pennsylvania — rely on coal for most of their energy.  In 2008, the 228 coal-fired power plants operating in all eight Great Lakes states  could produce 111,000 megawatts — enough to power about 72 million homes.

All that coal is accompanied by significant carbon dioxide emissions.  The Great Lakes states rank among the top in the nation for CO2 emitted by coal-fired power plants, according to EPA data.  And with mandates to increase renewable energy production in seven Great Lakes states — Indiana is the hold out — power generators are looking for ways to clean up their image.

The trees, crop waste and local grasses in the region can be turned into a renewable, carbon-neutral fuel that can be burned in existing coal fired power plants with minimal modifications.

Carbon-neutrality assumes that CO2 released by fuel combustion would be released by natural processes, such as decay, so burning the fuel won’t make a difference for the atmosphere’s greenhouse gas load.  Or, for example, the gases released by burning a tree can be negated by planting a new tree.  Technically, carbon-neutral fuels don’t contribute to climate change.

Proponents tout biomass as a quick way to dent  the region’s fossil fuel dependency, but skeptics are leery of the environmental implications of cutting down forests to power refrigerators.

“We look at biomass as a potentially low carbon and sustainable renewable energy resource, but the specifics of the kind of biomass and how it’s harvested and re-grown are really key to its environmental benefits,” said Ben Larson, an energy advocate and field manager for the Union of Concerned Scientists’ Climate and Energy Program.  If done correctly, burning biomass alongside coal can be a relatively inexpensive way for a utility to generate renewable electricity at an existing facility, he said. 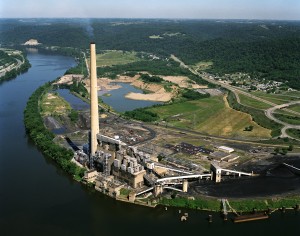 The R.E. Burger power plant is making the switch from coal to biomass. Photo: FirstEnergy

FirstEnergy’s R.E. Burger Plant in Shadyside, Ohio, is making the switch.  The plan is to burn biomass with coal before switching entirely to biomass in two of its units in 2012.  The plant will be the largest biomass-fired power plant in the country, said Mark Durbin, a spokesperson for FirstEnergy.

Biomass in the Great Lakes region

Biomass energy isn’t new or unique to Ohio.  Michigan already has seven biomass-fired power plants.  Minnesota has four. Wisconsin has a power plant making the switch from partial to total biomass use.   But the existing plants don’t provide much energy.  At most, they can serve their surrounding communities.  The power plants generally rely on waste wood left by lumber and paper mills to fuel their turbines.

But a recent study out of Michigan Technological University in Houghton, Mich., suggests the state is sitting on a gold mine of natural resources — enough biomass to provide a significant amount of power. The study looked at the feasibility of burning woody biomass for 20 percent of a 600 megawatt coal-fired power plant’s energy output.  They used the proposed Wolverine power plant in Rogers City, Mich., as their model.   Roughly 10,500 tons of woody biomass would be required for every megawatt, but Michigan’s growing forests could easily sustain the harvest, said Robert Froese, an associate professor at MTU’s School of Forest Resources and Environmental Science.

As an added benefit, because biomass is generally considered carbon neutral, CO2 emissions go down when it’s added to the mix.

But not everyone is on the biomass train.

Not everyone is convinced

“Biomass is politically carbon neutral,” said Lee Sprague, the Stop Coal campaign manager for Michigan’s Sierra Club chapter.   But it’s an illusion of neutrality, Sprague said.  Burning wood releases less CO2 than coal, but it still emits the gas. The only way to reach neutrality is if all those carbon atoms are taken up by plants.  That’s impossible, Sprague argues, if trees are burned for fuel.  The carbon atoms will spend 50 years in the atmosphere waiting for new trees to grow, he said.  While in the atmosphere, biomass CO2 is just another greenhouse gas.

Still, woody biomass can be both sustainable and carbon neutral if used properly, said Larson of the Union of Concerned Scientists.  Biomass-fired power plants that use the tops and branches of trees left by the lumber and paper industries achieve neutrality because that woody debris would have rapidly decayed on the forest floor and released its CO2 into the atmosphere anyway.

But while waste wood may seem like a good source of biomass, there isn’t nearly enough of it to make a dent in Michigan’s power production, said Marvin Roberson, a forest ecologist for Michigan’s Sierra Club chapter. “Treetops and wood waste are low quality forms of energy,” he said.  Waste wood has half the energy density of whole trees, and as the resource is depleted it has to be trucked in from farther and farther away — effectively nullifying its benefits, Roberson said.  In general, if biomass has to be trucked more than 50 miles it cannot compete with inexpensive coal.

Some smaller biomass plants in Michigan have had to move away from waste wood and are now harvesting whole trees for power, Roberson said. “Nobody’s going out into the woods and picking up logging residues to try to make it with woody biomass.  The only way to economically use biomass is to cut green trees, chop them up, take them to the plant and burn them,” he said.

That’s bad news for forests still recovering from logging that left the countryside bare a hundred years ago.  Harvesting trees for power “will cause significant pressure to keep our forests in young, early successional recovering states, as opposed to the big majestic forests we once had and could have again,” Roberson said.

Still, the forest is recovering, and Froese argues that it can handle increased logging pressure.  “We’ve got more and more forest every year,” he said.  And the forest growth is far outpacing the harvest.  “We have potential because the forest is being used below capacity,” he said.  If we cut one tree for every tree that grows, the forest would stay static, he said.

Roberson believes Froese’s calculations are off the mark and rely on too many assumptions about the availability of forest resources.

It’s a highly nuanced area, said Larson of the Union of Concerned Scientists.  The benefits of biomass depend on the details.  “There’s lots of potential for biomass, but you need to look at what’s being used and how it’s being used,” he said.

For Froese, biomass is part of the equation for weaning the area off fossil fuels.

“We need to use everything,” he said.  “That includes wind and solar and geothermal and we need to use biomass.  And we know we have systems in place to do that sustainably… It comes down to do we want green power or do we not?”