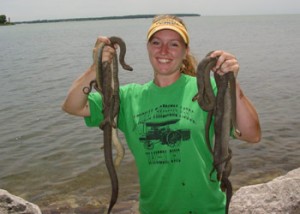 An Ohio activist dubbed “The Snake Lady” and a university researcher have been honored for their efforts to conserve the threatened Lake Erie watersnake.

Kristin Stanford and Richard King of Northern Illinois University are among this year’s 18 recipients of the recently announced U.S. Fish and Wildlife’s Recovery Champions awards.

According to a U.S. F&W press release, the pair has put in a combined 35 years of work to save the snake and its habitat. King has been working since the 1980s and identified early declines in the population and threats to the species.

Stanford has “worked tirelessly to reach out to residents of the Lake Erie islands”  to teach them how to live with the snake.”

“The dedication of Ms. Stanford and Dr. King to the conservation of the Lake Erie watersnake, through both scientific methods and strong public involvement, has recovery efforts for this species to the point that the next step is  to propose removing it from the list of endangered and threatened species.  There is no greater measure of recovery success,” said Midwest Regional Director Tom Melius.

Also honored for the Midwest region are the International Crane  Foundation staff and its founder George Archibald for increasing the captive populations of whooping cranes in Wisconsin.

Kraig McPeek, Service Private Lands biologist, was feted for his efforts in Iowa to restore 40 oxbow habitats for the endangered Topeka shiner.

2 thoughts on “Three cheers for the snake lady”