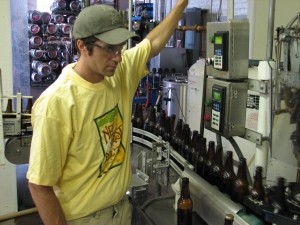 A unique blend of climate and tradition make the Great Lakes region the best in the country for beer brewers and drinkers, enthusiasts say. And because it can take up to 12 gallons of water to produce one gallon of beer, proximity to 21 percent of the world’s fresh, surface water doesn’t hurt, either.

“There are communities with strong beer drinking traditions from the old country who have settled here,” says John Mallett, production manager at Bell’s Brewery in Kalamazoo, Mich. “We’re blessed with an abundance of great water, grain, and at one point, hop growing in this region that made it possible to develop those traditions.”

Wisconsin, Michigan, Pennsylvania, New York, Ohio and Illinois rank 5th through 10th respectively in number of breweries nationwide, according to 2009 figures from the U.S. Alcohol and Tobacco Tax and Trade Bureau. More than 550 breweries operated in the eight Great Lakes states last year – 24 more than in 2008.

New York, Pennsylvania, Illinois, Ohio and Michigan ranked 4th through 8th respectively in beer production in 2009, according to the industry-funded Beer Institute. Together, the Great Lakes states produced more than 1.7 billion gallons of beer in 2009 – almost 27 percent of the country’s total production. 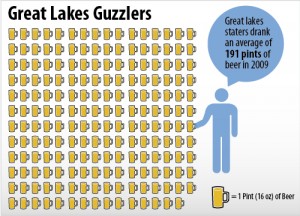 And Great Lakes staters can put them down.

Based on total population, regional boozers consumed an average of about 191 pints of beer in 2008, about 17 pints more than the national average, according to the Beer Institute. That assumes every man, woman and child drank. Clearly, some drinkers are picking up the slack. Wisconsin ranks sixth nationally in per-capita beer consumption.

“We’ve got that kind of bent, that kind of genetics that say, ‘we like beer,’” says Rex Halfpenny, editor of the Michigan Beer Guide.

A strong brewing heritage in cities like Milwaukee, Chicago and Cleveland contributes to that brew-happy DNA, says Russ Klisch, president of Lakefront Brewery Inc., in Milwaukee.

“It’s just part of the culture,” Klisch says. “You go to the ballgames, family picnics. Ever since I’ve been a kid, the beer has always been there. You socialize a lot with a beer in your hand.”

People in the coldest states, like Montana, New Hampshire, North Dakota and Wyoming, drink the most beer per capita, according to the Beer Institute.

“The weather is conducive to staying inside and drinking, whether it’s inside a bar or inside of your house,” he says.

Water is by far the most substantial ingredient used in beer making. And the Great Lakes provide a lot of it.

“The great thing about the Great Lakes is we’re not super limited with water,” Mallett says. “We’re not facing the restrictions that they do in the high desert.”

At least not yet.

Brewers use an average of 7 to 12 gallons of water to make a single gallon of beer, says Lucy Saunders, the author of several books about microbrewing. The United Nations recommends brewers reduce that figure to about 5 gallons.

“Some breweries are already honing down to 3 gallons of water to make a gallon of beer,” she says. 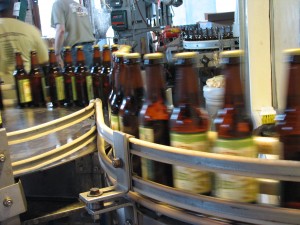 In the past, brewers would sometimes clean tanks by filling them with fresh water, then drain them. Now brewers often use automated nozzles to clean tanks, or they do it less often, she says. Others capture and reuse wastewater.

“Water is definitely on everybody’s radar,” Saunders says. She expects water rates and surcharges for pre-treating wastewater will increase because of the Great Lakes Compact, federal legislation that restricts large-scale diversions from the Great Lakes basin.

Water-intensive businesses in the Great Lakes have traditionally operated from a sense of abundance, says Saunders, the organizer of the upcoming Great Lakes Water Conservation Workshop for craft brewers in Rochester, N.Y

“I think that abundance is still going to be there. It’s just going to cost more,” she says. “To save money and be efficient is really a smart business decision.”

Not all water is created equal, Mallett says.

Hard waters around Burton-on-Trent, England were well-suited for dry, bitter beers, he says. Dublin is famous for stouts because its water has a high pH level – good for producing dark malts. And the soft water in the Czech Republic is great for producing hoppy, golden-colored pilsens.

Mallet says the Great Lakes region is “the latitude and longitude that beer drinking is really taking place over in Europe.”

He says the region’s seasons give brewers more opportunity to celebrate the diversity of their beers.

“We can make a very wide range of different beers and that really reflects part of the seasonality,” Mallett says. “Oktoberfest wouldn’t taste the same in March.”

Halfpenny has written about beer for about 14 years. He expects the Great Lakes drinking trend to continue.

“In recessions and depressions, people drink more,” he says.