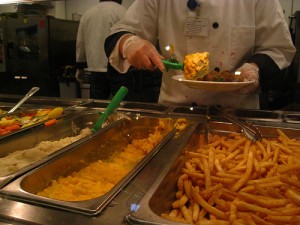 Nearly 9,000 schools across the country did not have any food safety inspections, during the 2007-2008 school year.

But the law requires two every year.

Approximately 27,000 schools, or 26.7 percent of schools in the 50 states and Washington, D.C. had one inspection or less of their food safety operations, according to data from the U.S. Department of Agriculture’s Food and Nutrition Service.

Any school that serves meals as part of the federally funded National School Lunch Program or the School Breakfast Program is required to meet certain health standards and requirements, one of which is for food safety inspections to be made twice each school year, according to the U.S. Department of Agriculture.

“They are checking for cleanliness, hazard procedures, if the food is at the appropriate temperature; those are the major things health inspectors are looking for,” said Jean Daniel, spokesperson for the U.S. Department of Agriculture’s Food and Nutrition Service. “Not doing them [the inspections] is not meeting the requirements set forth by law.”

The Child Nutrition and Women, Infants and Children Reauthorization Act of 2004 increased the requirement for schools from one inspection a year to two, beginning with the 2005-2006 school year.

When ranking the states by percentage of schools not meeting the requirement, the Great Lake states ranged widely. Michigan was 14th with 30 percent,  Illinois- 17th with 28 percent, Pennsylvania- 25th with 17 percent, Ohio- 26th with 17 percent, Indiana-31st with 14 percent, and Wisconsin-43rd with 9 percent.

By law, schools must have two food safety inspections every year.

The Child Nutrition and Women, Infants and Children Reauthorization Act of 2004 also requires the states to report how many inspections their schools have had each year to the U.S. Department of Agriculture’s Food and Nutrition Service.

During the 2007-2008 school year, 21 states and Washington, D.C. had at least one school that did not report their number of inspections, leaving the status of 2,681 schools across the country, unknown.

California schools contributed significantly to this total with 1,288 schools in the state not reporting their number of inspections.

“Of course, we are concerned with this and it affects students’ safety, but I think you are aware of the fiscal situation and certainly in Michigan,” said Alan Shannon, director of public affairs for the Midwest Region of the U.S Department of Agriculture’s Food and Nutrition Service. “There just aren’t enough resources to do everything that ought to be done, and that is a concern.”

And there isn’t yet a formal solution for punishing schools that don’t meet the requirement, according to Shannon.

“Right now, we point it out to them that it is of concern to us and that they need to get the numbers up,” Shannon said. “The only other thing that we could do is withhold funds, but what that is going to result in, is kids not eating.” 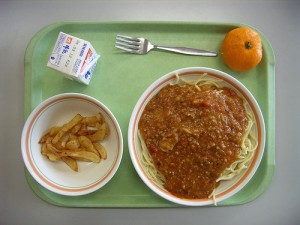 A trend towards improvement

“What we see from the first year to the latest year is improvement,” Daniel said. “We have made progress.”

Economic downturn may be responsible for schools not being able to meet the new requirement, according to Daniel.

The inspections must be conducted by a state or local governmental agency that is responsible for food safety. In most cases, the agency is a local health department.

“We know across the country that local and state governments are being squeezed, and they may not have enough inspectors to get to every place,” Daniel said. “While we are sensitive to the concerns and challenges to getting these done, they do need to be completed.”

Often, the same people performing the inspections for schools must also inspect restaurants, events providing food and other facilities as well.

Officials from Michigan’s Ingham County Health Department said so far, the agency has been able to provide two inspections for each school in the county.

“We have been able to keep up with our inspections,” said Diane Gorch, Ingham County Health Department’s food safety program supervisor. “I don’t want to say with no problem, but we are doing it.”

The county has seven inspectors who inspect 995 food service facilities. Each inspection is estimated to take between one and two hours.

Gorch said without one of their inspectors, they would be hard pressed to perform all the inspections. Losing two would mean they would have to go to a risk-based schedule, where only the facilities with the highest risks would get inspected.

“We could probably still pull a rabbit out of the hat,” Gorch said. “But we would be running as hard as we could.”

Approximately 69 percent of the 3,845 schools that reported in Michigan met or exceeded the requirement, ranking it 37th in the nation.

The right amount of inspections for a safe operation

But how many inspections make an operation safe?

Not having two inspections does not make a school food operation dangerous, according to Chuck Lichon, former director of environmental health with the Midland County Health Department in Midland, Michigan.

“This shouldn’t scare anybody,” Lichon said. “The number of inspections isn’t indicative of the quality of the operation in the school.”

He said schools are not the facilities to be worried about.

“Schools, generally speaking, usually have pretty good leadership and staff in terms of food safety,” Lichon said. “It is rare, as far as I am concerned, to find a school that has a problem with food safety.”

Ingham County health inspector Amy Thomas said in the 15 years she has been in the position, she has never come across a major safety incident with a school.

“It is different than what you may see at a restaurant,” Thomas said. “Most of the time, schools are very educated and the employees go through a lot of training.”

Lichon feels one inspection would be sufficient and second, follow up inspections could be made on a case-by-case basis.

Eighteen thousand schools had one inspection during the 2007-2008 school year.

“It is just a number; the fact that someone walks in from the health department doesn’t mean someone waves a magic wand over the kitchen and everything is better,” Lichon said. “I think it is more of a perception thing for people; It is a feel better thing.”

To Gorch, the justification for the requirement comes from the people the inspections serve.

“We consider children to be a vulnerable population,” she said. “Without the immunities gained as we reach young adulthood, they are more susceptible to bad things, and that’s why we think it’s important for them to be inspected, even if it is twice.”