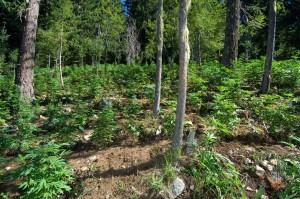 It’s an often violent, lucrative form of manifest destiny in reverse. And Great Lakes states, too, are feeling the burden.

Authorities seized more than 7.5 million marijuana plants grown outdoors on more than 20,000 sites in 2008, according to the U.S. Drug Enforcement Administration. More than 2.6 million plants were found on public lands in 2007, a 37 percent increase from the fewer than 1 million seized in 2004.

Marijuana farms were found in 61 national forests across 16 states in 2009, up from 49 forests in 10 states in 2008. Growers have expanded into national forests in Michigan, Wisconsin, Alabama, Colorado and Virginia. But most of the outdoor production still happens in western states – 80 percent of all outdoor eradication came in California, Oregon and Washington in 2007, according to the DEA.

What illegal farmers add and subtract from these public lands is an equation that endangers entire forest ecosystems, the public, law enforcement officials and the growers themselves. Forest Service officials are not forthcoming about answering questions about the issue.

Marijuana production on U.S. public lands has been a problem since officials discovered the first farm in California’s Sequoia National Park in 1998. But increased border security after 9/11 has made it more difficult to smuggle marijuana. Growing the crop on secluded public lands lets farmers avoid discovery during border-crossings with the added financial benefit of proximity to their primary consumer base. 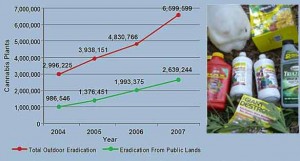 Marijuana seizures from sites outdoors and on public lands have increased significantly since 2004, according to DEA figures. The photo shows a few of the chemicals California authorities found on a single grow site. Image: California Bureau of Narcotic Enforcement

“It’s easy to do,” says Michelle Gregory, who has participated in more than 50 pot farm eradication efforts since 2003 with California’s Campaign Against Marijuana Planting, also known as CAMP. “You can cross the border and you’re here, and pick a spot where you want to grow it.”

In California alone, authorities seized almost 4.4 million plants in 2008 – 70 percent from public lands. That’s up from 621,000 plants and 58 percent in 2004, according to CAMP. Involving 110 different agencies, CAMP is the country’s largest law enforcement task force.

Producing illegal pot outdoors in the United States is a growing agribusiness – officials say the plants seized in California in 2009 would sell wholesale for $17.8 billion. But taxpayers pay much of the cost of the farms that get cleaned up, sometimes as much as $1 million for a single site. The long-term detriment to the environment is harder to calculate.

Michigan’s marijuana eradication program found 38,000 outdoor plants in 2008 – more than in any of the previous six years that Lt. David Peltomaa has run the state’s program. But he says his team, operating primarily in helicopters, doesn’t find even half of the state’s grow sites.

The country’s national forest system includes 193 million acres – including 36 million acres of wilderness – patrolled by only 535 law enforcement officers, according to the U.S. Forest Service. Forests are ideal for clandestine farms. Many areas may never see a body walking through them, Peltomaa says.

“You’re talking about thousands of acres of forests, and the plots can be in less than a half-acre,” he says. “Unless you’re flying right over it, you’re not going to see it.” 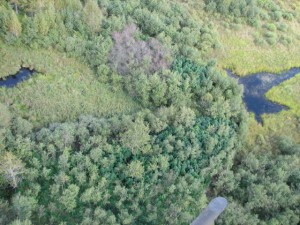 This aerial view of a 4,000-plant grow site on state land in Michigan. The marijuana is a deeper shade of green. Image: Michigan State Police

Drug cartels often hire undocumented workers from Mexico to work as farmers, Gregory says. They hike or use small vehicles to reach spots that are increasingly remote, have nearby water sources, and heavy tree cover to hide them from helicopters.

Farmers live for months at a time at the site, bringing in food, tents, tarps, bedding and propane to fuel fires. They foul streams with human waste and leave behind thousands of pounds of garbage.

“Imagine 10 adults or so camping out in the forest for a summer, and living there and working there and not removing any of their trash,” says Colorado-based spokesman Mike Turner.

Growers chop down all but a few trees, leaving enough canopy to shield the site from the air, while allowing sunlight to reach the plants. They thin the shorter vegetation and ring the site with brush and chopped logs to keep deer from their plants and bears from their camps.

This wood – along with farmers’ camp and cooking fires and propane – provides a potent fuel for wildfires. Authorities say a stove used by suspected drug traffickers sparked a wildfire in Los Padres National Forest in California’s Santa Barbara County in August that burned more than 88,000 acres and forced the evacuation of more than 230 homes.

Farmers scrape off ground cover that protects the forest floor from erosion. They dig holes about every 10 inches and plant tens of thousands of marijuana seedlings often transported to the site in plastic containers.

Growers run miles of drip lines – rubber or PVC piping – from a water source like a stream to irrigate the plants. Sometimes they divert streams to the plants, breaking down banks and causing erosion. Others use tarps to create water pits for irrigation that can also drown animals.

Water is key, and farmers will go to great lengths to get it.

Gregory traced a drip line from an 80,000-plant site in Riverside County in 2008 that led to a well on the ranch owned by the late comedian Red Skelton’s wife.

“They just came on the back side of the property and dug in there, stuck it in and buried it,” she says. “They get pretty brazen, because they need the water.”

Farmers set traps and use poison – some long banned in the U.S. – to keep insects, rodents, raccoons, rabbits and skunks from eating the plants and from chewing on the irrigation lines. The poison can move up the food chain to animals eaten by humans, officials say. The farmers also shoot animals like foxes, mountain lions and bears that come near.

In July, Krogen’s crew found the remains of five skunks and some rattlesnakes that growers had killed, skinned and eaten. Officials have found endangered species like the California spotted owl and ringtail cat they say were shot by farmers.

Marijuana is a weed that can grow just about anywhere. But there’s little natural about how farmers grow these highly potent strains of the plant.

“It’s not like these guys are going to go wash them off before they give them to people,” Gregory says.

The planting loosens the forest ground. Heavy rains can wash the soil, chemicals and poisons into streams. Fertilizers increase algae and weed growth, which slows the water. 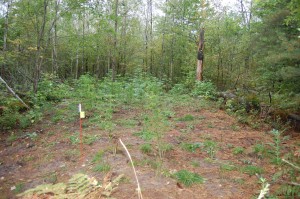 But it’s not just trained law enforcement officials who discover these illegal operations. It’s often hunters, fisherman, hikers, mushroom hunters and families who either stumble upon or find and follow irrigation lines to grow sites. And that can be dangerous.

Authorities often find booby traps near the sites, including trip lines and boards buried in the ground with spikes sticking up. Gregory says drug traffickers increasingly arm the farmers to protect their profit.

“They’ve been told to stand and fight,” she says. CAMP seized 142 weapons from outdoor grow sites in 2008.

In June, two officers were shot and one suspected grower was killed in a gun battle near a pot farm in California’s Lassen County. Gregory says a law enforcement dog had to have a stick removed from his rib area after being stabbed by a farmer.

Authorities tell people who think they may be near a plantation to back out immediately and call 911.

“You, your family and friends ought to be able to go into a national forest without worrying about walking into someone’s outdoor grow,” Peltomaa says.

Authorities say they are overwhelmed by the number of pot farms on public lands, and don’t have enough funding to clean them properly. Agents either burn or bury plants on site or remove them by helicopter. Land management agencies and volunteers are often left to reclaim the territory.

Agencies such as the Bureau of Land Management, the Department of Fish and Game and the national forest and park services often recruit volunteers to haul out as much of the garbage, chemicals and irrigation lines as possible. But many of the sites are difficult to reach by vehicle.

“Unfortunately, there’s so many of them out there and the cleanup process takes so long and is so expensive that they can’t get to every single spot,” Gregory says.

But it’s critical that officials remove the materials, not just to restore the land, but because farmers often return to the same sites and plant again. They may wait a year, or sometimes not even a day.

“Our reclamation teams are having growers coming back on them when they’re trying to clean up,” Gregory says.

Farmers hike much of the materials to the site. “That’s pretty labor-intensive,” she says. “If that stuff gets left in there it’s just easier to come back to the same spot, reattach the drip lines and use the same stuff that’s there instead of having to go someplace new.

“You just fix it up and use it again.” 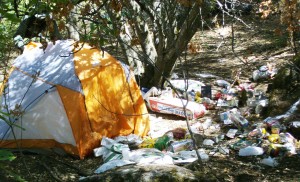 “These are public lands,” he says. “They’re not meant to be the sole province of someone who decides to grow marijuana. It’s not theirs to decide to clear cut trees and plant and scare people off.”

If you find a marijuana farm on public land, leave the scene immediately and call the authorities. Callers to Michigan’s tip line can remain anonymous: 800-235-HEMP.