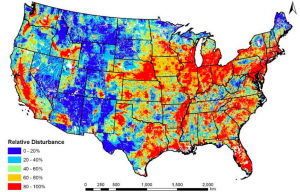 Facing an inhospitable habitat, fish either have to move or die, says Bryan Pijanowski, a Purdue University associate professor of forestry and natural resources.

“Some of the fish live in aquatic systems that are completely compartmentalized – they’re dammed off,” he says. “So they can’t move.”

Models show how global climate change also changes how land is used on global or national scales. But now Pijanowski and other researchers are combining these broad models with new research to predict the effects on fish in local streams, including identifying the manmade barriers to migration.

The scientists hope to predict, for instance, how the cold-water-loving cisco will adapt to a warmer Great Lakes. They want to know how warming waters will prompt largemouth bass to move further north. They hope to discover if brook trout may have to abandon mid-Michigan rivers for colder water. The findings will help resource managers decide how best to protect key species and habitats.

The scientists will link climate change models and predicted land-use changes to understand how fish habitat and distributions will change over 30, 50 and 100 years. 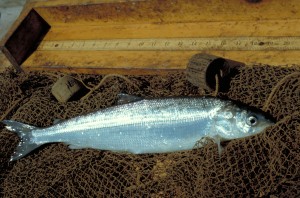 “If you’re an individual state manager like a state fish and wildlife agency, that doesn’t help you a whole lot,” he says. “We’re trying to take those models and downscale them to make it more relevant for policy and decision makers at the state and regional level.”

The goal is to help resource managers protect vulnerable watersheds and important species.

“The quality of the water depends on how we manage the land,” Pijanowski, who studies how land-use changes affect water and fish. “If we don’t do it right, we’re just going to destroy those precious resources.”

Pijanowski says high corn prices driven by demand for biofuels led to a significant amount of Indiana woodlands being used to produce corn.

“What I’m seeing here is a pretty transformational landscape, back into more intensive uses of the land” for food and biodiesel production, he says. Those changes, along with increased urban sprawl and changing irrigation practices, can contribute increased nutrients and sediments into the water.

“If we destroy a lot of these natural resources that people want to go to and recreate, we’re also destroying our local economies,” Pijanowski says. “In some cases we have small communities in these rural areas that depend on fishermen to come there for trout fishing in the spring and in the fall.”

By the fall of 2011, the team hopes to determine the areas most vulnerable to habitat change. It plans to predict fish distribution changes by 2013.

Pijanowski says the team feels a sense of urgency to complete the project.

“We have to get it done now quickly because we have to have plans in place,” he says. “The longer we wait, probably, the costs go up.”

The project’s findings won’t just benefit resource managers. Pijanowski says fishing on his grandparents’ lake as a child helped him choose a career in ecology.