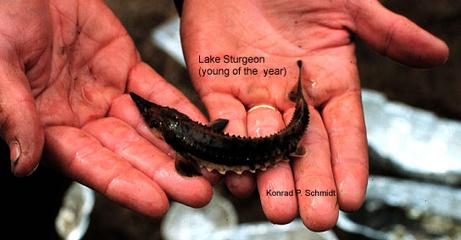 LANSING–Lake sturgeon, one of the oldest surviving species from prehistoric times, is making a small comeback in the Great Lakes region.

“They’ve increased about a couple of percent since their lowest numbers, but at least the populations aren’t going down anymore,” said Bruce Manny, a fishery biologist for the U.S. Geological Survey’s Great Lakes Science Center in Ann Arbor.

The increase is due in part to a spawning project in Black Lake, an inland lake in Cheboygan County.

According to a report in the Journal of Applied Ichthyology, 40 percent of the lake sturgeon released into Black Lake as part of the project survived their first winter, but Manny said, there are no estimates on the actual number due to a lack of comprehensive studies.

Towns said reefs built along the Detroit River are beginning to attract some spawning sturgeons.

“They might all die or get eaten, but at least they’re spawning,” he said.

“We’re hoping that things are turning around because they’re an interesting and critical part of the ecosystem,” Towns said.

To aid the turnaround in population, the DNR enforces extremely restrictive fishing requirements for sturgeon, including a special license and limits on how many fish may be caught and held per year.

Manny describes the fish as an environmental barometer that can be used to test the quality of drinking water.

“If these fish can reproduce and thrive, we can say the source from which we draw our water is safe,” he said.

Jim Boase, a fishery biologist for the U.S. Fish and Wildlife Service in Waterford, points to a remediation site in the Trenton Channel on the Detroit River in Riverview as potential spawning ground for sturgeon.

Chemical giant BASF Corp. cleaned up the site which Boase said is now regarded as a possible spawning area.

© 2009, Capital News Service, Michigan State University School of Journalism. Not to be reproduced without permission.