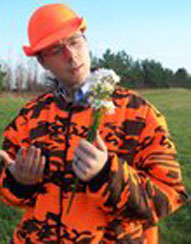 A question of ethics

Cast your vote: Should Andy hunt?

Last week I watched the great John Huston film The Misfits, and there’s a scene I can’t get out of my head.  Clark Gable, Eli Wallach and Montgomery Clift have taken Marilyn Monroe with them on a “mustanging” trip into some Nevada mountains.

Monroe goes into hysterics when she learns that the men aren’t wrangling wild horses so birthday girls can lope around on them — they’re to be slaughtered for dog food.  “Honey, a kind man can kill,” Gable says, as much to convince himself as to calm her.  “No,” she insists.  “He can’t.”

The scene resonates because I want to take part in Michigan’s firearm deer season, which opens on November 15, but I’m not sure if I should.  I can’t decide if a kind man can kill.

I used to be a deer hunter, and still am in thought if not in deed.  My driving becomes somewhat serpentine in farm country where the fields want a good looking-over.  If I’m lucky enough to spot a band of whitetails, some old urge still gnaws at me if any of them sports an ivory-hued rack.  I still look for rubs and tracks in the woods.  I sometimes crave venison stew.

It’s been about a decade since I last donned blaze orange and shouldered my slug-filled Mossberg.  Not long before that I shot my first buck, a remarkably unlucky four-point that trotted into the stand of poplars I was stalking through and stopped, broadside, twenty yards in front of me.  Bang.  It ran a hundred yards or so, wheezing through the hole I’d shot in it, then lay down and died.

I was happy; I felt initiated into a long tradition.  My grandpa’s feelings were unmixed as he showed me how to dress the buck.  He beamed, and kept saying, “What a beauty, boy!”  I was proud, but also amazed by the amount of blood that poured and then dripped out, turning the snow pink.  I went hunting for another year or two, but I didn’t mind seeing only does, and when college classes started getting in the way of deer camp I didn’t resist.

Cast your vote: Should Andy hunt? 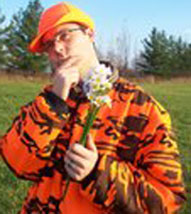 Is it more honest for a meateater to kill dinner than to shop for it?

Yet the old tug of opening day is still there, and this year it’s stronger than ever, for whatever reason.  It could be because I’m a new husband and homeowner, and feel an ancient compulsion to bring fresh meat back to my wife (she’d rather I didn’t).  Or maybe I’m pushing against the prominent brand of environmentalist who obsesses over food miles and carbon emissions but has no idea what’s happening in the woods, and couldn’t tell a white pine from a blue spruce if his vintage bicycle was on the line.

Probably it’s those reasons and more, mixed with sentimentality: I miss the days of waking to my grandpa’s trademark call, “Daylight in the swamp!”  I have an olfactory longing for the Holy Trinity of deer camp smells: Hoppes No. 9 gun-cleaning solvent, lousy coffee and bacon.  I miss watching cold dawn sweep over the pine barrens, cedar swamps and oak ridges, and the old hunting stories that got harder to believe but more entertaining each year.

But I certainly don’t need to hunt; there’s a great Thai place just down the street.  So the big question is, can I ethically kill a living thing if I don’t need to eat it to survive?

The ethics of the hunt

I asked Michael Nelson, an environmental ethicist at Michigan State University who recently published a paper on the ethics of hunting, what he thought. “Many of us who think about an ideally sustainable world can well imagine hunting as a part of that world,” he said in an e-mail.  “In fact, many of us can imagine hunting far more readily than we can imagine any of our large scale agricultural practices.  This might mean, at a minimum, that from a conservation ethics perspective hunting is in our minds a more ethical activity than is most contemporary agriculture.”

OK, so lock and load, right?  Not quite:

“One of the most important things to realize in this debate is that, since killing living things is a serious business, the burden of proof falls on those who wish to hunt,” Nelson added.  “We should not hunt animals unless there is a good reason to hunt them.  This then requires those that wish to hunt to provide valid and sound arguments to defend their hunting.”

So, aside from tradition, vague instinct and a reactionary streak, what are my reasons for wanting to hunt?

For one thing, as a recent Great Lakes Echo story illustrated, there are too many deer in Michigan, and they’re bad news for small farmers, not to mention drivers.  Michigan’s Department of Natural Resources recommends shooting does to help control the population, and I’m happy to oblige.

Then there’s the point Nelson alluded to in his e-mail:  If I’m going to eat meat, which I try to do only occasionally, it seems to me more honest to kill the animal myself, to see firsthand that it was once alive and that now it is dead because of me.  Our agriculture spares us this messiness.  The steak simply arrives on the plate, with little to suggest it was part of a creature that cared for its young and felt pain.  Omnivores who decry hunting stand on indefensible moral ground; at least the deer I killed lived an unfenced life. 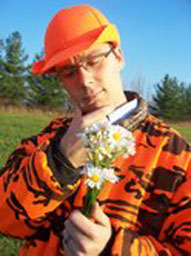 What would Leopold do?

I’m also encouraged that great conservationist Aldo Leopold was an avid deer hunter — he who said, famously, “A thing is right when it tends to protect the health and integrity of the ecosystem.  It is wrong when it tends otherwise.”  I wear a kind of mental What Would Leopold Do? bracelet, and feel philosophically confident following his example.

Getting my meat from the woods instead of the farm avoids the environmental and ethical problems modern agriculture presents, yet I can’t get around the simple truth that I don’t need to eat meat to survive.  Sure, Leopold killed deer, but a lot has changed since he died, in 1948. (Even his death — a heart attack while helping a neighbor fight a wildfire — seems a kind of moral instruction).  I can’t help but wonder if he’d still be a hunter today.

So you see dear reader (pun intended, and relished), I’m adrift in uncertainty.  You can help by participating in this poll. Should I go hunting? But more importantly, in the comment section below tell me why you believe as you do.  Does deer hunting promote ecological health and integrity?  Does it tie us to valuable traditions and to the land?  Or is it just a brutish expression of some vestigial instinct?

Can a kind man kill?

Andy McGlashen writes for Michigan State University’s Environmental Science and Policy Program and is a graduate of MSU’s Knight Center for Environmental Journalism.