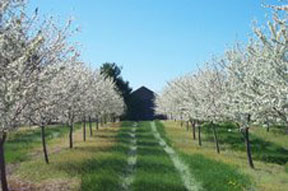 Despite the global nature of modern industries there has never been a study measuring the impact of climate change across an industry.

The National Science Foundation recently awarded a $1.5 million grant to an international research team to study climate change and the tart cherry industry.

The aim of the study is to provide tart cherry farmers with a global perspective on their industry. Farmers in northern Michigan and in Eastern Europe will see how climate change affects their respective orchards in a way that reflects the growing international nature of their industry.

The grant to Michigan State University follows a 2003 award from the Environmental Protection Agency that the university used to assess climate change and Michigan’s tart-cherry and tourism industries.

Used in desserts and drinks, about 70 percent of the United States’ tart cherries come from Michigan. Nowhere else in the world produces more of them than the Traverse City area in the northwest of Michigan’s Lower Peninsula.

It is a good industry to study because cherry orchards are sensitive to weather and require long-term investment – about a 20-30 year commitment. Growers have limited options to adapt when compared to annual cereal grains where they can plant something new the next year.

In 2002, the tart cherry crop in Michigan was almost completely wiped out by a devastating late spring freeze. Filling the market demand were imports from Poland.

That prompted Julie Winkler, an MSU climatologist and professor of geography, and MSU geographer Jeff Andresen, to study climate change and the state’s tart-cherry and tourism industries.  Their Pileus Project created models relating climate to production and economic consequences.

The freeze and resulting imports raised the notion that the industry is increasingly global.

“When we were talking to the tart cherry growers off-hand they said ‘what about Poland? What’s going to happen in Poland?’” Winkler said.

Now Winkler and her colleagues will look at the effects of climate change across the entire industry to get a better idea of how the Poland and Michigan industries influence each other.

“What we are trying to do here is come up with a method that gives us the type of detail that stakeholders in the industry need that you would have for a traditional local/regional sector, but then try and have this global focus,” Winkler said.

Climate change is hard to notice because it takes place over decades. Don Gregory, a founding member of Traverse City-based Shoreline Fruit and a tart cherry farmer for almost 40 years, says the best evidence is his cherry harvest dates. The harvest traditionally peaks around June-July.

“We’ve had some years where we’ve started harvesting on July 4th and finished harvesting cherries as early as the last week of July, Gregory said.

“We had other years like this year where we actually finished harvesting cherries in the middle of August that was almost 25 days later than last year. We see these variations on a year-to-year basis. A lot of the variation in crops is weather related issues.”

It used to be common that Grand Traverse Bay would freeze over in the winter. Now the bay consistently remains unfrozen. An unfrozen bay stems from warmer winter weather that usually means an earlier blossoming of tart cherry trees. With earlier buds, the cherries are more vulnerable to damage from a late spring freeze.

Brian Beauchamp, a policy specialist at the Michigan Land Use Institute, says climate change is likely the cause of the warmer winters and that it affects agriculture in northern Michigan.

“Climate change raises a lot of questions,” Beauchamp said. “How do farmers adapt and change? It is important to bring together the regional agricultural sector under a common theme of resilience.”

Importing cherries from Poland in 2002 was a rare event, according to farmer Jim Bardenhagen, who owns a fruit farm in Leelanau, Mich. The concern is that rare events might become more frequent.

Models like the one Winkler’s research team is developing could help him make informed business decisions about his farm, he said. “It’s definitely something to look at.

Winkler’s research team is conducting a first-of-its-kind study designed to help people think about climate change not just in Michigan or in the Great Lakes area, but internationally.

“That could facilitate a broader spatial perspective on climate change and help us realize that we are more connected globally,” Winkler said.