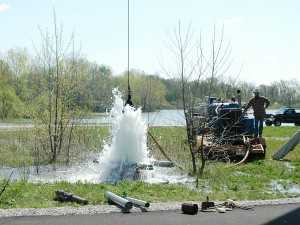 A small group in Bryan, Ohio spent six years securing federal protection for an aquifer that provides water to 385,000 people in Ohio, Michigan and Indiana.

Now the U.S. Environmental Protection Agency is poised to designate the Michindoh aquifer as the sole source of drinking water for 1,600 square miles.  The designation will include all or part of nine counties in the three states that supply its name.

The protection is important for communities with few drinking water options.

And for Bryan, the Michindoh aquifer is the only option.

“What we have is really precious,” said Lou Pendleton, the director of public relations for Bryan Municipal Utilities.  “There are no alternative sources, either because the local stream doesn’t have enough capacity or because building a water distribution system would be just extraordinarily expensive.”

Bryan, Ohio, like several of its neighboring towns and villages, is miles from a substantial stream, river or lake.  Residents rely on wells that tap into the glacial water just below the surface.

If an aquifer provides at least 50 percent of residents’ drinking water it can be designated as sole-source.  The label adds a layer of protection.  Federally funded projects must pass muster to make sure that they do not pose contamination risks to the aquifer, said Bill Spaulding, the sole source aquifer coordinator for EPA’s Region 5.

Each day, 385,000 people draw more than 72 million gallons from the Michindoh aquifer.
Contamination would be bad news.

“This area is predominantly served by wells and if it was to become contaminated it would pose a difficult situation being able to supply water to this area,” Spaulding said.

While the aquifer will be protected from federally funded projects, one of the greatest benefits from the sole-source designation is awareness, Pendleton said.

“So many people just take the groundwater for granted,” she said.  “We’ve always had it…You can stick a well just about anywhere around here and you’re going to get safe, plentiful drinking water.  We’re hoping that as part of the benefit of getting the petition or recognition that it’s a sole-source aquifer is then making people more aware of it and adopting methods to try to protect it.” 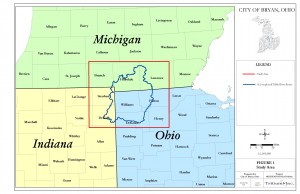 The application required in-depth studies of the region’s geology and geography.
With such a large project underway that would impact so many people, the city of Bryan reached out to the other communities that rely on the aquifer.  The response was generally positive, but offers to help were limited.

“They said ‘this is great,’ but nobody wanted to help fund the project,” Pendleton said.  In the end, Bryan’s board of public affairs voted to add a surcharge onto residents’ water bills to pay for the study, she said.  Safeguarding the sole water source of 385,000 people is a lot of responsibility for a town of just 8,000 residents.  “We’re doing the heavy lifting” for the other 377,000, Pendleton said.

While towns in the area couldn’t provide much financial help, some are grateful for the designation.

“Anything we put into effect that can better require safety and protection for that drinking water I think is an actual good thing,” said Bill Blakely, the superintendent of water treatment for Montpelier, Ohio, eight miles from Bryan.  “It’s one piece of a puzzle that we can put into play to protect that natural resource that we hold dear in this part of the country.”

Blakely hopes the region can build upon the sole-source designation to take further strides to protect the drinking water.  “It’s just one of those steps. Is it foolproof?  Probably not, but having it as a sole source aquifer…goes one step further in the protection plan,” he said.
Still, the folks in Bryan largely felt they were on their own to protect an aquifer so many depend on.

“There just wasn’t much interest about it … We sent out letters and our DVD of the project and the information and we didn’t get any response from anybody,” Pendleton said.  “You take it for granted, I guess.”

The EPA will finalize the designation after the public comment period ends on November 9.