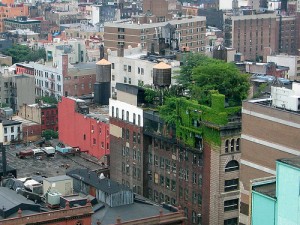 Green roofs like this one in Manhattan can capture heat-trapping carbon dioxide from the atmosphere. From alykat's photostream on Flickr

Planting the rooftops in Detroit has the same environmental benefit as removing 10,000 SUVs off the road, according to a recent study.

“This study is the first of its kind,” said head researcher Kristin Getter. “We knew these roofs had benefits, but we didn’t know they would be able to store carbon.”

Carbon dioxide is a greenhouse gas emitted by the burning of fossil fuels such as oil, natural gas and coal for transportation, power production and industrial development. High concentrations are linked to global warming.

Researchers found that the plants on green roofs absorb and store carbon from the atmosphere.

Their findings were applied to the Detroit metropolitan area, which has between 65 million and 85 million square meters of available rooftop. Planting vegetation on all of it could also mean storing approximately 55,000 tons of carbon, Getter said. That has the same environmental impact as removing thousands of trucks or SUVs from the road.

“A traditional roof is not storing any carbon, but a green roof is a brand new storehouse,” Getter said.

The carbon study was conducted over two years. Twenty plots of plants were placed on MSU’s Plant and Soil Sciences building. Both the above and below ground plant material was harvested every other month during the growing season.

The plants were then weighed and their carbon content measured. Approximately 375 grams of carbon per square meter was stored throughout the study.

“We were thinking they probably wouldn’t store very much, and it isn’t a lot compared to a forest or grassland, but it is more than what a traditional roof would have,” Getter said.

Results of the study were published in the Environmental Science and Technology journal. Two other parts of the study investigated species-specific plants on green roofs.

The roofs are used on buildings in Chicago, Manhattan, Toronto, and Washington, D.C.

“The biggest benefit in the U.S. is their ability to help conserve energy because the soil acts as extra insulation,” Getter said. “They also help reduce noise and air pollution.”

According to Getter, the recent study identifies one more function of what is often called “a living roof.”

4 thoughts on “Shifting carbon from roads to roofs”