DETROIT – The two-story brick building on Chene Street has a dirt floor and no roof, but it does have four walls — more than you can say about many of the structures still standing in this section of Detroit. 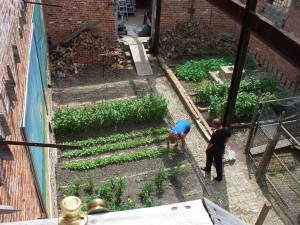 They keep the weeds out and give the place a cloistered air. Passing clouds form an elegant ceiling, and this part of the city is nearly silent. It’s a perfect spot for a garden.

Shirley Robinson grows a few herbs and vegetables here, and she’s started raising chickens. Her zinnias spring brightly from the dirt floor, and she sells fresh bundles of them at the city’s Eastern Market.

“I’ve always been a gardener,” she explains. “Except for the three years I was out getting high.”

The walled garden is part of a bigger food-growing effort by Peacemakers International, a ministry that helps addicts get off the streets and into jobs. Its gardens are part of a larger network of citizens, nonprofits and entrepreneurs working to turn the Motor City’s bedraggled wastes into a patchwork of productive green space.

The city doesn’t have a single national chain supermarket, prompting public health advocates to label it a ‘food desert.’ More than half of Detroit’s residents must travel twice as far to reach a grocer as they do to get to a convenience store or fast food restaurant, according to a 2007 report by the Chicago-based Mari Gallagher Research and Consulting Group. That puts them at significantly higher risk for illnesses like diabetes, cardiovascular disease and some cancers, the report says.

The nearest shop to Peacemakers’ headquarters is a liquor store stocked sparsely with dust-coated cans and an entire aisle for ramen noodles. Before the ministry started growing green beans, peppers, turnips, peas and other vegetables, getting to the closest fresh carrot or cucumber meant walking – few neighborhood residents can afford a car – a mile-and-a-half gauntlet of crack houses, abandoned factories and vacant lots.

“Can you imagine doing that in winter?” asks Mike Score, an agricultural innovation counselor with Michigan State University. “Who are you going to leave your kids with? And then what are you going to do, carry your groceries past a bunch of crackheads?”

Score is a key player in transforming the city’s 40 square miles of vacant land from a liability to an asset. He lobbied his bosses for a post in the Chene Street neighborhood where his great-grandparents settled. He has been working there for nearly a decade to reconnect people with food. 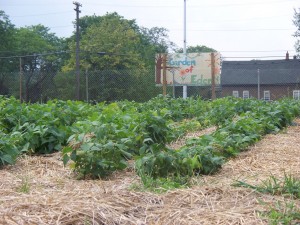 At Peacemakers he helps plant and maintain a couple of gardens and a greenhouse to grow food almost year-round. Some of the recovering addicts who live there spend part of their week working in the gardens, which for many is a new experience.

“People in the inner city have never seen anything grow, and they’re amazed by it,” Robinson says. “They’re out there laughin’ and jokin’ and fellowshippin’.”

They grow much of the food right out in the open. “If people want to go in there and get something to eat, they’re more than welcome to it,” she says. On Tuesdays, they share their produce with the neighborhood’s hungry, and they occasionally sell it at markets to help fund the ministry.

“But we can only grow so much,” Robinson adds.

That reality isn’t lost on Score, who says the city can’t afford to provide services to neighborhoods that don’t contribute to its tax base.

“How do you build an economy in a place like this?” he asks. The answer comes from the area’s early days, when French settlers farmed the fertile land alongside the Detroit River. “The food system absorbs everybody, because everyone can find something to do.”

Score advises the Hantz Group, a financial holding company that plans to buy thousands of the Motor City’s cheap acres and turn them into what may be the world’s biggest urban farm. The hope is to ease the burden on city services while putting properties back on the tax rolls.

Score says CEO John Hantz, who lives in Detroit’s Indian Village, was troubled by the decay he saw in the city and decided to do something about it. As a citizen, Hantz expects the farm to serve as a model of sustainable agriculture, provide sorely needed jobs and restore a sense of community pride. As a businessman, he plans to turn a profit.

In addition to vegetables, the farm may include orchards, timber stands and a Christmas tree operation. The company plans to install wind turbines and solar panels, and use geothermal heat. Farm workers will give schools and youth clubs tours, donate food to ministries like Peacemakers and hold a festival every week.

The group hasn’t forgotten that patches of contamination dot the city’s soil, and the farm will take the right measures to keep it from getting into food. It may grow plants that can suck chemicals out of the ground, and highly contaminated areas may be paved over, with greenhouses built on top.

“If there’s a site that’s contaminated, employees and neighbors need to be notified,” Score says. “But we actually have a pathway that can turn any site into an asset, because we’re working with Michigan State.”

The first parcels they’ve tested had safe soil. But even if they find contamination, it offers university researchers a chance to develop cleanup methods that can then be shared with other scientists and urban farmers, Score says. 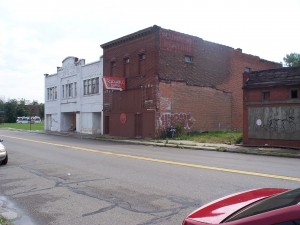 Parts of Detroit have unsafe levels of lead, other heavy metals, arsenic and asbestos in the soil, said Pam Howd, a soil contamination expert with the Michigan Department of Environmental Quality. But if properly handled, the risks of contaminated soil don’t outweigh the benefits of fresh produce in the city.

“If they find there’s a lot of contamination, there are lots of native trees that can take it out of the soil,” Howd says. “Really, they’d be doing everybody a favor by planting trees.”

There are still tax and zoning hurdles to be jumped before any shovels can hit the ground, but economic forces and time have already done most of the demolition.

“Look around,” Score says, driving through a block of boarded-up and burned-out squatters’ dens. “If you want to put a farm in here, there’s not a whole lot left to take down.”

Meantime, in Peacemakers’ humble plots, the peppers are bright red and the eggplants are deep purple. The green beans are a big hit at the market, and the chickens should start laying eggs any day.