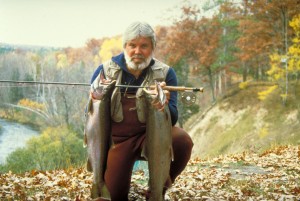 Great Lakes residents can be exposed to contaminants in the fish they eat.

Editor’s note: This story is part of an occasional series on the Great Lakes Restoration Initiative

With more than 100 projects vying for a piece of the $475 million Great Lakes Restoration Initiative, taxpayers may wonder:  Are they worth it?

At least one agency is poised to find out if restoration projects will lower pollutants in people.

Eighteen of the proposals in the initiative to clean or protect the Great Lakes address contaminants.  The Agency for Toxic Substances and Disease Registry intends to monitor some of those projects by checking for contaminants in Great Lakes residents’ blood and urine.  The goal is to analyze them before cleanup and then several years later, said Steve Dearwent, the chief of health investigations in the agency’s division of health studies.

“In a perfect world, (we’d) be able to detect some decreases in body burden for whatever the contaminants or class of contaminants that we may be looking at,” he said.

The agency will also compare contaminant levels in Great Lakes residents to the rest of the country.  “We can use the current measurements to try to figure out if the populations are currently at background levels … or possibly elevated,” Dearwent said.  The agency will compare Great Lakes levels to data at the Center for Disease Control’s National Health and Nutrition Examination Survey, a program that measures contaminants in thousands of people nationwide every year.

Monitoring contaminant concentrations in Great Lakes residents is helpful for spotting issues that are specific to them, said Jackie Fisher, the environmental health coordinator in the Great Lakes national program office of the Environmental Protection Agency.  “It’s like little pieces of a puzzle we’re trying to fill in and get a better understanding of what’s happening so we can make better choices, whether it’s for restoration or for public health information,” she said.  “Just having better information to make better decisions is really what we’re hoping for.”

While the agency has not chosen which contaminants to look at, it will most likely focus on the usual suspects, Dearwent said.  “I think in general that we could say that we’ll probably be focusing on persistent organic pollutants, so the chlorinated pesticides, PCBs, possibly dioxins and furans, possibly polybrominated diphenyl ethers and possibly some heavy metals.  Those in general are usually the contaminants or classes of contaminants that we look at, either because of their burden to public health or because of their persistence in the environment and in people.”

Due to the project’s scale and long timeline, the agency is already seeking additional grants on top of the $5 million included in its restoration initiative proposal.  The federal agency will distribute the funds on the state level to local governmental and academic organizations that will be responsible for collecting samples, Dearwent said.

While funding is contingent on Congress passing the restoration initiative, Fisher is optimistic about seeing projects move past the planning stage.

“It’s an exciting time in the Great Lakes right now,” she said.