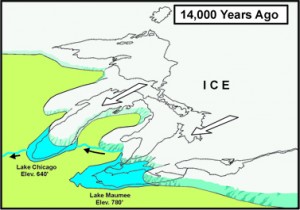 The Great Lakes basin is still bouncing back from the weight of the glaciers that formed the lakes. Click for 10,000 years of history. Illustration: Army Corps of Engineers, Detroit District

Even today the Great Lakes landscape is bouncing back from the glaciers that retreated 10,000 years ago.

A key question researchers recently sought to answer is whether that has anything to do with fluctuating lake levels.

Here’s how it might work: The massive ice sheets pushed down the earth’s crust like a person pressing on a basketball, said Grahame Larson, professor of geology at Michigan State University.

And when the ice is gone, the relatively pliable layer under the Earth’s rocky crust rebounds, though more slowly than the surface of a basketball.

“When you stop pushing on the basketball, the basketball surface pops right back up,” Larson said. “But on the Earth it doesn’t pop up all of a sudden. It takes a while.”

In fact, the Great Lakes basin is still rebounding, but at different rates in different places.

When the glaciers left, they retreated into the northeast. So the land that’s been free of its glacial blanket longer has had more time to rebound, Larson said.

In the northeastern region of the basin, around Lake Superior, the land rises about a tenth of an inch each year. In the southwest corner, the surface is likely stationary.

That uneven tipping of the basin could result in one lake pouring water into another, Larson said.

The International Joint Commission, a binational group that manages the Great Lakes, wanted to know if that was happening between Lake Huron and Lake Erie. 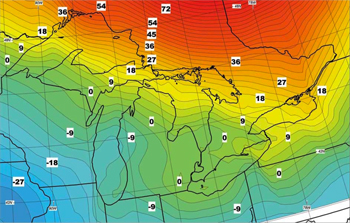 The regions of the basin shown red are rising fastest. Illustration: US Army Corp of Engineers. Click for PDF.

The Georgian Bay Association, a group of homeowners on northeastern Lake Huron, say navigational dredging in the St. Clair River is responsible for Huron’s dropping level. The group commissioned a report from engineering consulting firm W.F. Baird and Associates that blamed dredging for allowing more water to flow from Huron into Erie.

The IJC report found a few reasons that Lake Erie could be up compared with Lake Huron, including climate variability and an ice jam on the St. Clair River in 1984. The report placed no blame on dredging.

It also concluded that rebound-related tipping wasn’t a factor in the shrinking difference between the two lakes.

But the tipping did affect the accuracy of water level gauges used in the 2004 Baird report that said dredging is the culprit, the report said.

The IJC report used gauges near the outlets of lakes Huron and Erie. That’s the only way to make sure measurements aren’t skewed by glacial rebound, Larson said.

According to the IJC study, the Baird report used measurements from gauges too far from the lakes’ outlets, leading to an overestimation of how much Lake Erie has gained on Lake Huron.