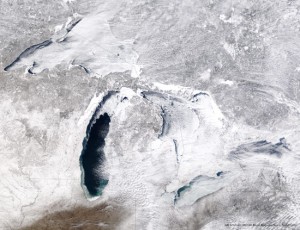 Some shoreline cottage owners blame dredging and other human-caused activities for eroding the St. Clair River and lowering Lake Huron.

But experts with the International Joint Commission cite variations in climate as the main cause for dropping lake levels in recent years.

Although erosion from both human and natural causes contributed to the declining water levels in lakes Michigan and Huron, it has only played a small part in recent years, said Frank Quinn, a participant in the IJC study.

“The change in (the lake levels) was maybe 50 centimeters from the 1990s to the present, and my finding was that between five and seven centimeters was due to erosion,” said Quinn, a former senior research hydrologist at the National Oceanic and Atmospheric Administration’s Great Lakes Environmental Research Laboratory. “That means the rest of it is due to the climate.”

That does not mean climate change in terms of human-caused global warming, but rather the natural variations in a typical climate regime, Quinn said.

“We were not looking at what might happen in future with global warming, we were looking over what might have happened in the last 50 years,” Quinn said.

One of the largest factors was a general drying and drought in the Lake Superior basin in 1998 and 1999, which in turn meant less water coming out of the basin and into lakes Michigan and Huron, Quinn said.

“Lake Superior tends to be in a different climatic zone than the lower half of lakes Michigan and Huron and Lake Erie,” he said. “Erie has had a lot of precipitation and runoff.”

Human-induced climate change caused by the burning of fossil fuels could be a factor, but that’s hard to say, according to experts.

Whether the climate changes in the past several decades are a result of natural variation or global climate change cannot be determined with current historic records, said Al Steinman, director of water resources at the Annis Water Resources Institute in Muskegon, Mich.

“Whether it is a function of the natural cycle, or human induced, it’s impossible to say with certainty,” he said. “But if you look at the patterns around the planet, and the rising carbon dioxide levels…it’s a reasonable hypothesis to generate that this is being caused by human-related factors.”

Warming temperatures lead to less ice cover for the lakes, which in turn leads to more evaporation and declining water levels, Steinman said.

Because there have been significant changes over the past several decades, rigorous science experiments must be conducted to determine exactly how the climate is impacting the lakes, he said.

“The science we do right now is a very small investment into making sure the much larger, longer-term investments are done right,” he said.

Instead of simply looking at models of the lakes, researchers are looking to put monitoring equipment on the Great Lakes to obtain better data on evaporation, Steinman said.

“We already have one on Lake Superior, and one is going on Lake Huron this year,” he said. “This information will help inform the IJC.”