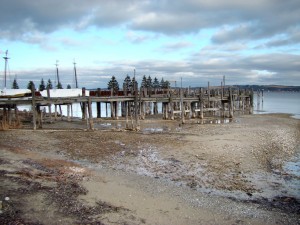 When the Great Lakes are high, shoreline houses risk erosion that could tumble them into the water. When they are low, more structures are exposed to wind damage, boaters can’t pull up to docks and ships can’t transport as much cargo.

And lately, both things have happened at the same time, puzzling scientists and frustrating property owners.

“The lake levels normally oscillate together,” Quinn said. “It’s this difference that has made people say that we have a problem.”

The International Joint Commission, a binational group that works to manage the Great Lakes, released a draft of a report in early May that looked into the causes behind this difference in water levels.

The report concludes natural causes are the culprit. Before 2000, natural erosion of the St. Clair River, which helps connect Lake Huron with Lake Erie, caused the change in water levels, the report says. Since then, the change comes primarily from variation in the climate.

However, not everyone agrees with the study.

A group of cottage owners on Lake Huron, known as the Georgian Bay Association, says manmade activity such as dredging the river for navigation is draining the lake faster than normal. It wants controls installed on the river to help regulate Lake Huron.

But the study board advising the IJC is not recommending artificial controls to moderate the amount of water flowing from lakes Huron and Michigan into Lake Erie.

“The recommendation against remediation comes from the notion that the change was not human caused but naturally caused,” said John Nevin, a senior policy advisor at the IJC. “The change is not ongoing, and the change was small.”

A report commissioned by the cottage owners in 2004 found human-made causes of erosion in the St. Clair River including dredging, shoreline alterations and sand and gravel mining.

The IJC report did not examine dredging, but that is something that the study board will increase focus on over the summer, Nevin said. The results will be in the final report, which is expected to be released in 2012.

The draft of the IJC report found the capacity of the St. Clair River to be about 5 percent larger than it was in the early 1960s. The yearly fluctuation in water levels in lakes Michigan and Huron affect how much water flows through that 5 percent increase, Nevin said.

“There may be additional water loss when levels are high, which is actually a good thing – we would avoid damages due to high water,” Nevin said. In 1985 and 1986, the water levels were so high that houses along the shoreline in Saugatuck and Grand Haven were falling into Lake Michigan, he said.

But the shoreline owners say that’s beside the point.

“We’re asking for measures to hold back water levels when low, but when levels are high, you let water flow through without any interference,” Muter said.

The Georgian Bay Association also criticizes the IJC’s modeling of how the river works. But Nevin said that the modeling system the property owners advocate is primarily used to measure pollution transport and is unnecessary to study how the physical nature of a river has changed.

The IJC study group approached the study from about six different perspectives and used about 100 scientists, Nevin said. The Georgian Bay Association worked only with one engineering firm.

But Muter said that bigger does not necessarily mean better.

Now the public is getting into the act. The IJC scheduled 14 public review sessions for community members to comment on the draft of the study.

About 10 people attended the May 20 review in Evanston, Ill., said Dan Thomas, president of the Great Lakes Sport Fishing Council, who moderated the session.

“There was no controversy or hostility,” Thomas said. “The questions reflected a more general interest in receiving more information.”

Several members from the Georgian Bay Association attended the Cleveland, Ohio, public review session, and they expressed their displeasure of the study, Thomas said.

“Everybody else seemed to be generally either pleased or accepting of the process,” he said.

The next round of public review sessions is scheduled for June 9 and June 11.

If need be, the public commentary will be extended to give people a reasonable amount of time to voice their opinion, Nevin said.